Cellist Yo Yo is still gung ho for world of classics

Cellist Yo Yo is still gung ho for world of classics 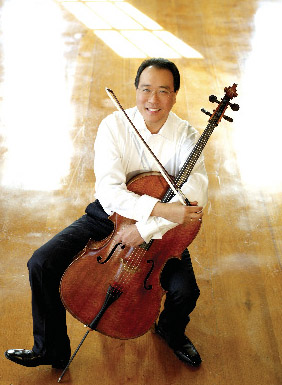 Yo-Yo Ma Provided by the organizer

Christmas is more than a month away, but the world-famous Chinese American cellist Yo-Yo Ma looked very much in holiday mood on his visit to Korea last week.

After all, he came here with a bagful of presents for his Korean fans - a duo recital with his longtime musical comrade Kathryn Stott and a new album celebrating the 30th anniversary of Sony Classical and Sony Masterworks.

In the recital last week, performed twice - on Tuesday at the Seoul Arts Center in the capital and on Thursday at the Hyundai Arts Center - the 53-year-old musician showed perfect harmony with Stott, a feat that can only come from years of friendship and experience.

Ma and Stott first met in 1978. They both happened to have rented an apartment in London from Nigel Kennedy, a British violinist and violist. Their fortuitous meeting has led to a decades-long musical camaraderie, concerts and recordings.

Stott is just one name in the long, long list of Yo-Yo Ma’s musical collaborators. In a 30-year career, he’s ventured into different lands, cultures, flitting between different musical genres and exotic sounds. Along the way, he’s gained experience, knowledge and, of course, friends.

His latest album “Songs of Joy & Peace” is collaboration between Ma and his friends - some old, some new - from around the world as well as from different musical arenas.

“[During the last 30 years] I’ve lost hair, but I’ve gained experience,” Yo-Yo Ma said with a mischievous smile in a press conference last Wednesday. “I don’t think I could’ve made this album even three years ago. ... I was able to make this album because of friends who helped me understand their music and guided me to places I didn’t know or where I was too scared to go.”

Due to the busy schedule of these high-profile artists, recordings took place in studios on different dates in different places: New York City, Tennessee and Shanghai.

“You can’t make real music unless you trust the person you’re working with,” Ma said. “Recording this album was like you watching Korean athletes doing well in the Beijing Olympics. After every session, I thought, ‘That was the best recording day I’ve ever had.’”

Ma, a CultureConnect ambassador of the United States Department of State since 2002, hopes the album will bring a sense of joy and peace during the holiday season. A wide variety of songs is included, some traditional, some religious and others simply old favorites.

Ma is one of the best-selling classical recording artists of all time, with more than 75 albums, 15 of them Grammy Award winners, on his resume.

Born in 1955 to Chinese parents in Paris, Ma began to learn the cello when he was four. His family moved to New York and Ma studied at the Juilliard School. He also received a traditional liberal arts education at Harvard University.

“I do different things, but they are all motivated by one very simple thing,” Ma said. “I look at any composer in the world and ask, ‘Who is this person? Why does he do what he does?’ I’m just like a kid that never grew up and keeps asking why. I just keep learning and moving on.”