Seon and the city

Seon and the city 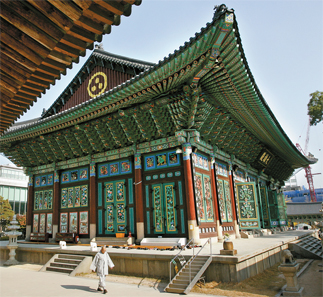 It’s a sight that is quintessentially modern-day Korean: a temple tucked beneath towering titanium skyscrapers.

As you stroll through the streets of Gyeonji-dong in Jongno, central Seoul, you can glimpse Jogye Temple between the modern office blocks and shops at the ancient heart of the capital.

The fragrance of incense and the sound of sutras chanted by monks blend into the din of the city.

Though Buddhism was introduced to Korea by China in 372 C.E., and though there are many historic temples in the mountains with some dating over 1,300 years, Jogye Temple has a short history.

But it isn’t age that brings maturity. It’s experience, the twists and turns of events that have shaped Korea’s recent history. 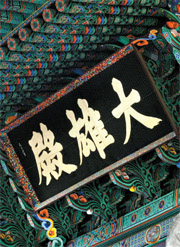 The quiet temple belongs to the Jogye Order of Korean Buddhism, which is known as Seon Buddhism. Seon, or Zen as it is known more commonly outside of Korea, means goodness or virtue.

There are some 27 religious Buddhist orders in Korea. The largest is the Jogye Order and the second largest, the Taego Order.

According to the Korea National Statistical Office, as of 2005 43 percent of Koreans who acknowledge having a religion say they are Buddhist.

Almost half of the Korean population has a religion.

Currently, there are some 3,000 Buddhist temples under the Jogye Order. 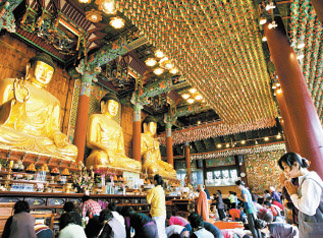 Inside of Daeungjeon. There are three Buddha statues from left, Amitabha, Sakyamuni and Yaksayeorae. By Park Sang-moon

They are represented according to 25 district divisions across the nation.

The modern Jogye Temple in Seoul was built in 1910, the year Japan annexed Korea.

Like other religions during that time, Buddhism was suppressed by Japan’s military and colonial government.

Different Buddhist sects united to fight for the country and started a religious cleanup movement, too.

The Jogye Order was formed in 1924 and Jogye Temple, which then was called Taego, was registered as its main temple.

A seven-storied stone pagoda, which a Sri Lankan monk presented to Korea in 1913.

The Buddhist order changed its name from Taego to Jogye in 1954. The hope was to exorcise all evil spirits from the dark days of Japanese colonization.

“Jogye Temple represents modern Korean Buddhism,” Yu said. “It is an historic place that lived right through the turmoil that modern Korea experienced.”

The main building is the first missionary house that ever existed in modern Korean Buddhism.

It is also the first Buddhist temple to be built within the four main gates of old Seoul.

Daeungjeon, which is registered as one of Seoul’s tangible cultural properties, refers to the sanctum where the great teacher - Buddha - resides.

Inside the main hall, there are three statues of Buddha: the Amitabha, Yaksayeorae and Sakyamuni.

The Amitabha, which is known to be the biggest Buddha statue in any single-storied temple in Korea, offers worldly happiness. 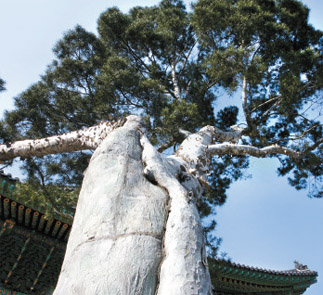 A 500-year-old pine tree outside the Jogye Temple.

The Yaksayeorae is the image of the Buddha statue as healer of the wounded or poor. It gives mercy.

The meditation hall is built on a one-story stone stylobate and is topped by colorful eaves and roof.

The ceiling is decorated with paintings of cranes, phoenix and landscapes. The colorful and elaborately decorated windows and doors are painted with flower patterns.

The architects who took part in designing the temple also worked on palaces that date from the Joseon Dynasty (1392-1910).

Choi Won-sik is one of them. He was tasked to restore the Daejojeon inside Changdeok Palace in Seoul during the 1920s.

utside the temple is baeksong, a rare ancient pine tree registered as a natural monument.

The tree is estimated to be more than 500 years old.

Facing right from the main hall is a seven-storied stone pagoda.

Experts say it was a gift from a Sri Lankan monk to Korea in 1913.

The temple is open 24 hours daily, and everyone is welcome to enter.

Finnish tourist Kristina Kinnunen, who was visiting the temple recently, said she wasn’t a Buddhist, but she enjoyed her time in the temple grounds for personal reasons.

“It’s very restful here; it makes you forget about all your worldly worries,” she said.

There are some 25 monks at Jogye Temple and about 50 religious affairs officials from the Jogye Order.

The temple, its officials say, contributed to bringing back the soulful spirit of Buddhism.

Reaching further back in time, Korea received a great deal of influence from Buddhist thought and support.

Buddhism provided an ideological foundation for the nation’s establishment.

“Korean Buddhism overall is linked together with the nation’s rise and fall,” said Yoo Myung-sun, one of the chief officials at the temple.

He noted the role of Buddhism through national traumas such as invasions by the Mongols and by Japan in the country’s past.

“Buddhism has helped the country overcome difficulties and galvanized the people to take part in nationalistic movements and to fight for freedom,” Yoo continued.

During the military regime under Chun Doo Hwan, for example, Buddhist monks came under government repression because the head of Jogye Order at that time was thought to rebel against the government.

According to a government fact-finding panel last year, the Chun administration on Oct. 27, 1980 dispatched over 3,000 soldiers and police officers to almost 6,000 temples nationwide.

Over 150 monks were arrested and subjected to torture, including beatings, water torture and electric shocks, the panel said.

Many of them, including the head of the Jogye order, were forced out of the temples.

The impact of the suppression remains today.

The Jogye Order headquarters has a special division that works to help Buddhists who had suffered during the repression in the 1980s.

“The lost spirit must be recovered fully,” Yoo Myung-sun said.

Yoo notes that Jogye Temple will continue to represent Buddhism in Korea.

On the day before the College Scholastic Ability Test last Thursday, Daeungjeon, the colorful main hall of the temple, was crowded with parents offering prayers to wish their children the best of luck.