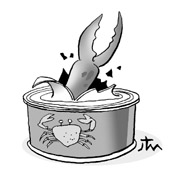 If a novel published 80 years ago suddenly becomes a bestseller, will the writer awaken from his grave in surprise? Such a scenario may be happening now in Japan with Kobayashi Takiji’s 1929 novel, “The Crab Cannery Ship.” This year alone, 500,000 copies, 100-fold of last year, have been printed. It has also been translated into Korean.

The boom of a book that reflects on the plight of the lower classes, is not just a case of reactionism once again becoming fashionable. Instead, it is the outcome of a serious socioeconomic crisis.

When it was first published, the Kamchatka Peninsula, then Russian-held was a golden fishing ground, where Japanese crab fishing ships used nets to catch crabs.

It was so valuable that Japanese naval ships that saw victory in the Russo-Japan War, would sail to protect the fishing boats. The ships were called cannery ships, because they had a factory to can the catch right on board.

Based on a real story, the novel denounces the inhumane treatment of the laborers on board the ships, who came in search of work, and details the beginnings of their actions to strike.

So why are people in their 20s and 30s, in the 21st century, reading proletarian literature long forgotten, from reality which only appears now in textbooks on the history of literature? Facing severe polarization, a high unemployment rate, the poor working conditions of day laborers and the absence of solutions, Japanese society has diagnosed itself; the young generation’s disappointment with such a reality has led them to identify with the laborers on the cannery ship, which has led to the book’s boom.

It is not only proletarian literature that has seen a revival. In Germany, sales of Karl Marx’s “Das Capital” rapidly increased this year. It is said that the tendency became more pronounced after the financial crisis that started in the United States spread.

Readers must have turned to “Capital,” which had been long forgotten by the general public, over other books by academia, because of growing insecurity and skepticism over the “casino capitalism” that brought about the current crisis.

The Archbishop of Canterbury, Rowan Williams, in a manuscript submitted to The Spectator, attacked the crisis by claiming it “exposes the element of basic unreality in the situation - the truth that almost unimaginable wealth has been generated by equally unimaginable levels of fiction, paper transactions with no concrete outcome beyond profit for traders.” The title of his piece: “Face it: Marx was partly right about capitalism.”