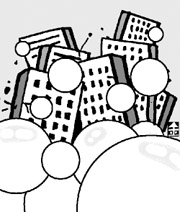 If there is a song called “Come Back to Busan Port” by Cho Yong-pil, one of the most influential singers of all time in Korea, then Japan has “Spring in Northern Country.” This is a song by Masao Sen, who is actually more famous for his real estate than his music. In 1990, his property portfolio exceeded the equivalent of 3 trillion won ($2.1 billion).

His life changed in 1966, when owing to the popularity of his debut song, he bought a plot of land near the Sendai area by investing money from his royalties. He then began buying other assets by borrowing money from the bank using this property as collateral.

He drove the most expensive Rolls-Royce by day, and hobnobbed with financial magnates in the most exclusive bars at night. Although forced to pay a huge amount of compensation when he divorced his blonde American wife, Joan Shepherd, the legend of “Masao’s billions” remained strong.

However, trouble came when the property market bubble burst. Sen applied for bankruptcy in 2000 and now he works as a karaoke bar singer.

The Long-Term Credit Bank of Japan loaned Sen a huge amount of money. The bank was considered a top workplace, open only to graduates of the exclusive Tokyo, Keio and Waseda universities. Chairmen of large conglomerates queued to bow before this bank, which loaned long-term funds at low rates. Elite bankers enjoyed its prestigious standing among lesser lenders.

However, things changed in the 1980s. Companies that became rich due to exports put their money elsewhere, but the bank could not forget its glory days of raking in profits while doing nothing. It turned to lending to private real estate investors.

When the bubble burst, the bank had to pay the equivalent of 3 trillion won because of Sen. And even though the Japanese government poured in 10 trillion won of public funds into the bank, it had to close its doors.

These days, banks are receiving applications for voluntary agreements from big shareholders in construction companies. The government is pouring in measures designed to stabilize Korea’s real estate every day.

The Japanese government opened in 1993 with the prediction, “The grand principle of the economy that nothing creates something was confirmed. If the bubble exists, we should pay huge amounts in costs.”

We are worried about the Korean version of Sen and long-term credit banks.

Last year, Sen released a new song with a refrain, “I wish to congratulate today,” reflecting his life. Bursting bubbles are not just the fate of others.