Hip-hop star leaps into short fiction to express his art

Hip-hop star leaps into short fiction to express his art 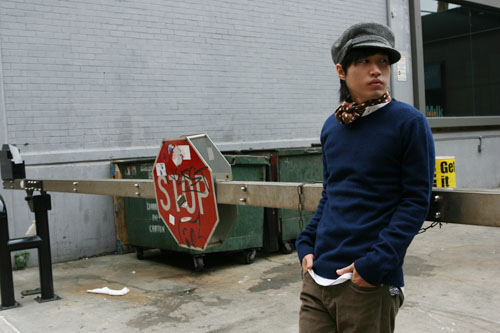 Tablo, 28, the leader of hip-hop group Epik High has once again made it to the top, but this time with a book.

The publishing company had to print an extra 20,000 copies this week.

“If it were not for my fame as a musician, the book wouldn’t have been this popular,” Tablo admitted in an interview last week. 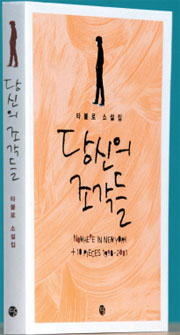 “Pieces of You,” a collection of 10 short stories written by Tablo. [JoongAng Ilbo]

Since his debut in 2004 with Epik High’s “Map of the Human Soul,” Tablo has been busy. The group has released six studio albums so far, producing hit titles like “Fly,” “Love Love Love” and “Fan.”

The band’s latest studio album is “Lovescream,” with its title song “One Minute and One Second.”

Tablo has also appeared in a MBC sitcom, “Nonstop 5” and co-hosted “Good Friends,” a radio show, with actress and comedian Jo Jung-rin. He also acted in “The Fantastic Parasuicides” (2007), a comedy film directed by Cho Chang-ho, Kim Sung-ho and Park Soo-young.

He rarely appears on entertainment programs or in commercials now because he said they stop him from delivering his passion towards music to the public. But he hasn’t quit his radio show.

He is currently the daily host on MBC radio’s “Dreaming with Tablo.” He said radio is a medium that allows him to express his identity as an artist.

But why did he take time out of his busy life to publish a book?

“I wanted to write a book in my late 20s that would wrap up my life thus far,” said Tablo, whose real name is Lee Sun-woong.

The collection is a translation of short stories he wrote in English from 1998 to 2001 at Stanford University where he studied creative writing and English language and literature under short story writer and professor Tobias Wolff.

The translation of Tablo’s stories might seem awkward at times but the original English version is scheduled to be published early next year.

As the author was in his late teens and early 20s at the time, the stories are mainly about vulnerable young people who wander the streets searching for an identity.

Tablo is well aware of the dark side of life, especially in popular culture in Korea. He said there is not enough variety in Korean cultural life. Everyone is striving for the same goal, he said, of earning money.

“Every era puts importance on different social values. Once, it was arts and at times, religion or truth,” Tablo said. “At present, people value comfort and money the most, which limits their passion for other things, like the arts.”

In music, he said there aren’t revolutionary musicians anymore like Seotaiji or Cho Yong-pil.

“Fewer musicians are having a social impact,” he said.