[TALK OF THE TOWN]Boot camp beckons for boy band balladeer

[TALK OF THE TOWN]Boot camp beckons for boy band balladeer 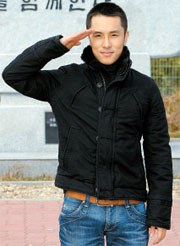 Last Monday at an army training camp in Gongju, South Chungcheong, some 200 fans from Japan, China, Taiwan and Hong Kong, were waiting for one lucky guy - star singer Kim Dong-wan.

It was the day Kim from Korea’s long-time idol group Shinhwa joined the army.

After four weeks in boot camp, he begins a two-year stint at the Seodaemun District Office, northern Seoul.

“I will do my best to serve the country,” Kim said. “Please look after the other guys in Shinhwa.”

Kim is the second member of the band to enter the army.