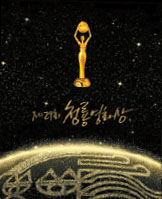 The 29th Blue Dragon Film Awards will be held tomorrow at the KBS Hall in Yeouido, Seoul. The red carpet ceremony starts at 6:30 p.m.

Awards will be given in 15 different categories, including Best Film and Best Director.

Nominees for Best Film include “Seven Days,” “Forever the Moment,” “The Good, the Bad and the Weird” and “Crossing.”

Actors and actresses in the running for an award include Kim Yun-seok and Ha Jeong-woo from “The Chaser,” Song Gang-ho and Lee Byung-hun from The Good, the Bad and the Weird, Kim Yun-jin from Seven Days and Moon So-ri from Forever the Moment.

The Best Film nominees were screened at the Daehan Cinema in
Chungmuro, central Seoul, from Nov. 9 to 18. Han Jae-rim’s “The Show Must Go On” was last year’s Best Film.