Facing up to the future

Facing up to the future 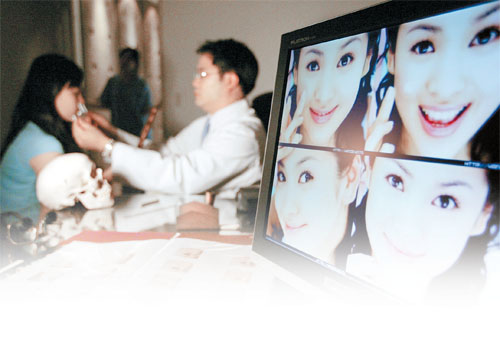 A cosmetic surgeon consults with a patient over facial cosmetic surgery, which is gaining in popularity during these harsh economic times, doctors claim. [JoongAng Ilbo]

One’s face can reveal much about the person. We can often tell a lot about the feelings and emotions of an individual through their facial features.

Oriental physiognomy, as well as its Western counterpart, is said to foretell one’s fate and destiny to a certain extent. But is it possible to change one’s fortunes through cosmetic surgery?

Kim Kwang-il, a 56-year-old who works in Geumho-dong, Seoul, has been face reading professionally for 30 years. In addition, he contributes columns to newspapers and various magazines on a regular basis.

According to Kim, one’s face can reveal a lot about one’s past, present and potential for growth in the future. 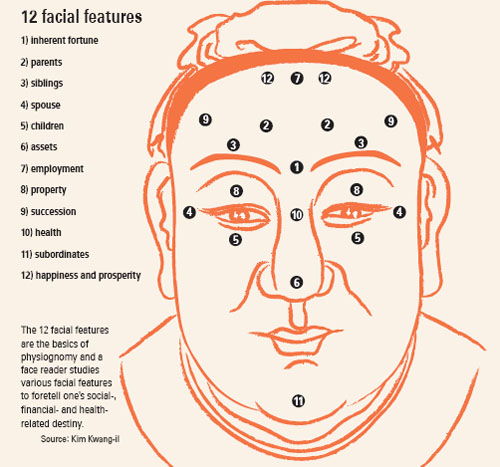 “Although I can tell a lot from reading one’s face, physiognomy is just one aspect of what I do. I study the face along with habits and body structure in order to get a firm grasp of the person’s predispositions. The person can have an ideal face in accordance with physiognomy but if the person does not have the right body to support it, it’s meaningless,” Kim said.

As he tells it, students preparing for college entrance exams as well as recent graduates seeking jobs have been frequenting his office of late.

“High school seniors along with their parents drop in to seek advice on which university to attend and which major to take up. University graduates seeking employment visit during the fall in preparation for the employment season in Korea,” said Kim.

As Kim went on to explain, the procedure for reading one’s face is clearly a complex study.

There are 12 basic facial features Kim looks at when face reading. These features give Kim a broad overview of a person’s predispositions. He then goes on to break down each feature on the face and piece it together to provide his visitors a detailed assessment.

“The first thing I look at when a person visits me is their eyes. Eyes can reveal a lot about a person and it is the most crucial feature on the face for face readers,” he said.

On the topic of destiny, Kim had this to say.

“Although hard work and perseverance can result in slight changes to one’s predestined path, there’s a limit to how much change can occur. It’s like comparing apples and oranges. A good harvest season might increase the taste and appearance of the apple but no matter what, it is what it is.”

The self-taught face reader says he started studying physiognomy out of curiosity in his mid-20s.

“In this world, some are successful and some are not. Everyone starts off in life thinking they’ll be successful in the future but that’s obviously not true. I began to question if destiny existed,” Kim said.

Oriental physiognomy and the idea of foretelling one’s fate and destiny sound interesting and a bit farfetched in these scientific times but there is a rising number of cosmetic clinics offering physiognomy cosmetic surgeries.

Earlier this year in March, an online recruiting company, Korea Recruit, surveyed 706 job seekers. On the question of whether they had cosmetic surgery to better their chances of finding a job, 22.4 percent said “yes.”

Furthermore, 83.5 percent said they thought that their improved looks had helped them find work, 43.2 percent said it has been a “huge help” and 40.3 percent responded it had been “somewhat helpful.”

Lee, a 25-year-old female job seeker says she decided to undergo physiognomic cosmetic surgery earlier this year after having trouble landing a job upon graduation.

“I was always unhappy with my nose but a meeting with a face reader about my employment opportunities helped me decide to go ahead with the nose job that I had been thinking about for some time. I think the physiognomic cosmetic surgery has resulted in a naturally improved look. I am satisfied with the results,” Lee said.

Park Hyun of Park Hyun Cosmetic Clinic in Sinsa-dong, southern Seoul said Lee is one of many. “It is interesting to note that the number of recent graduates looking for employment coming in for physiognomic cosmetic surgery is also on the increase,” he said.

A similar phenomenon has been reported by Park Sang-hoon of Doctor Park’s Special Bone Surgery Clinic. “More people are going to face readers out of frustration with the economic slump. They then visit a cosmetic surgeon to try to fix the problems that the face readers identify,” he said.

According to Park Hyun, as the job market gets increasingly more competitive, people believe their looks can give them the edge in beating out competitors.

“The age of those opting for physiognomy cosmetic surgery varies. There are people in their 20s who are looking for jobs and people in their 50s who tend to be businessmen,” Park Hyun said.

While the idea of studying one’s face to determine that person’s destiny and predispositions sounds interesting, do those who seek physiognomy cosmetic surgery believe they can change their fortune?

According to Park Hyun, such a belief goes against the philosophy behind his medical practice, but he doesn’t dismiss the idea.

“For example, oddly shaped noses, pointed ears and droopy eyes, among others, can incite unwarranted comments relating to one’s poor fortune. As with other cosmetic procedures, those involving physiognomy are meant to help build self confidence,” said Park Hyun.

He went on to explain that first impressions are important and that looks help create a positive image.

Although image is important, many job seekers may be misinformed when it comes to its significance in the selection process this employment season.

“Companies take into account looks during the hiring process, but they know loyalty and personality are also important,” said Lee Shin-sun of Career, an online recruitment agency. “Many Koreans have heard the story that Samsung was supposed to have employed a face reader at job interviews and I think that’s contributed to the rumors swirling around that some major recruiters hire face readers.”

After 30 years in the business, Kim Kwang-il said people should remember that inner beauty is just as important as one’s looks.

“I would have to say that although I can provide a glimpse of one’s past, present and future, the most important of all is simsang, or one’s mentality,” said Kim.

“Even if a person possesses the most desired and ideal face according to the beliefs behind physiognomy, if that person does not have the right mentality and good-hearted nature, the person will falter and waste his or her good fortune.”

According to face readers, physiognomy can foretell one’s social-, financial- and health-related destiny, to a certain extent.

Physiognomy derives from years of practice and observation.

The basics start with the outline of the face and 12 facial features that reveal a person’s predispositions and fortune.

Much like a fingerprint, face is like a map for one’s destiny, face readers tend to believe.

These points, labeled in the diagram above, are located in the same area for men and women.

The area above the forehead, numbered two and three on the diagram, can reveal one’s fortunes and relations with parents and siblings.

The space beneath the eyes, numbered five, can reveal the number of children you will have and their fortunes.

Property predisposition is about where you live.

Succession predisposition reveals information about one’s social fortunes and how one can adapt to one’s social surroundings.

The last of the predispositions relates to happiness and prosperity.

After examining these 12 predispositions, face readers go on to study sections of the face starting with the forehead, eyes, eyebrows, nose, mouth and ears.

Each section is further divided to include specific shapes and sizes of the facial features and what type of fortune or fate it can foretell.

For example, in speaking about the president-elect of the United States, Barack Obama, one face reader had this to say:

“Obama’s forehead reveals a good level of honor. His clear eyes reveal wisdom. Although Obama has nice facial features, his chin is a bit pointy, which means he might lack the ability to deal with a crisis.”

So check out your chin, and if it is protruding to a point, you had better make sure you don’t have to handle too many emergency situations in your life.