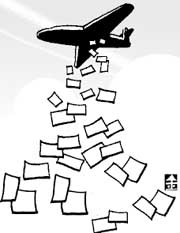 When the Allied Forces used psychological warfare against North Korea in the Korean War, they resorted to dropping leaflets, known as “paper bombs,” “infantries in psychological warfare” and “soundless gunfire.” Frank Pace, then secretary of the U.S. Army, ordered his troops to “bury the enemy with leaflets.”

Three days after the outbreak of war on June 28, 1950, the U.S. military dropped about 11 million leaflets containing messages to encourage the South Korean military.

To the North Korean military, 800,000 leaflets in the form of a newspaper called Parachute News were dropped on July 17 that year. It is estimated that the Allied Forces dropped 2.5 billion leaflets until the armistice.

Some leaflets proved popular. Soldiers and lower-ranking officers of the North’s Workers Party kept the “Security Guarantee Certificate” or “Safe Conduct Pass” with them just in case. They stated, “If you want to live, come South. What is written below in English is General McArthur’s order to all the international Allied and South Korean forces to treat North Korean prisoners of war well.”

North Korea also dropped about 30,000 leaflets during the war as part of its “operations to disintegrate the enemy.”

Many of the leaflets from both sides contained information like “If you surrender, you can avoid cold and hunger, your injuries will be treated and you will be able to return home.”

It is difficult to measure the effect of such psychological warfare. Daniel Lerner, an expert in psychological warfare who worked at the U.S. Office of War Information during World War II, classified leaflets into three categories: white, to convey facts; gray, to distort facts with a bias while most is true; and black, to deceive.

He said that since the objective of psychological warfare is to convince, a precondition of trust is vital, and thus, the only effective leaflets in the long run are white.

The dropping of leaflets in North Korea by local civic groups has become an obstacle in North?South relations. The government’s trouble is that there is no law forbidding their propaganda actions.

The North is strongly opposed to the leaflets, threatening to shut down Kaesong’s industrial complex and tourism program. Perhaps their sensitively is because what the leaflets say are true. Nevertheless, the civic groups should restrain themselves.

Actions that can influence the situation on the Korean Peninsula are beyond the realm of civilians and should be left to the state and the government.