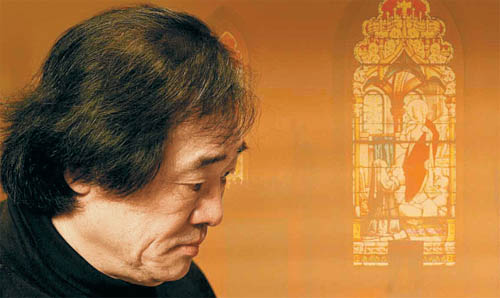 If you fancy a mystical experience that can only come through extraordinary music, you might want to put this on your playlist: pianist Paik Kun-woo playing Olivier Messiaen’s “Vingt Regards sur L’Enfant-Jesus.”

Loosely translated as “Twenty Gazes on the Child Jesus,” the two-hour, 20-piece cycle uses a range of sounds and plenty of dissonance to express God’s love.

It is considered one of the greatest piano works of the 20th century, and also one of the most demanding in terms of technique and stamina.

Paik, 62, has dared to interpret and play the entire collection of this monstrous piano suite twice in his decades-long career, first in the mid-1980s in Europe and then in 1996 in Seoul.

Paik will play the piece once again this month in Seoul to commemorate the 100th anniversary of the birth of the French composer Messiaen, who lived from 1908 to 1992.

“Just as Picasso had a clear vision of his artistic world, Messiaen had a clear voice about his world,” Paik said in a recent meeting with reporters at a downtown restaurant.

“It was about 30 years ago when I first heard the piece. I was a young artist then,” said Paik, recollecting his first encounter.

“I heard Yvonne Loriod [Messiaen’s wife] play it. Just imagine the musical shock it would’ve had on a young artist,” he said.

Although Paik is considered one of the best pianists in Korea and he’s already played the Messiaen piece twice, he says it doesn’t get any easier.

Kim went over Messiaen’s notes, perused the Bible and consulted with Catholic leaders to once again dissect, understand and rediscover the profound world of Messiaen.

“In order to understand a musical piece, it takes time. You have to live with it. ... The world of sounds is infinite and consequently, so are the challenges for musicians.”