Migrant laborers and their picture brides

Migrant laborers and their picture brides 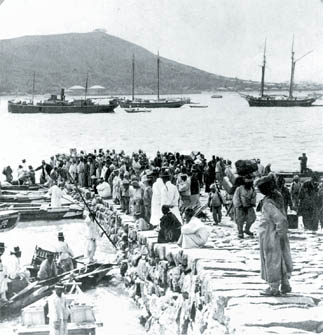 First-generation migrants wait at Incheon for the S.S. Gaelic to take them to the sugar plantations of Hawaii in late 1902.

Emigration is hardly a new phenomenon in Korea.

The first waves of Korean immigrants arrived in Hawaii between 1903 and 1905 when around 100 Koreans left Jemulpo Port (Incheon) in Korea for Nagasaki Port in Japan, then for Hawaii. The trip from Nagasaki to Hawaii took 15 days on a ship named the S.S. Gaelic.

The voyagers were issued Korea’s first passports by Min Young-hwan, who was in charge of Yuminwon, the original Office of Emigration. After a health examination, however, only 86 Koreans made it to Hawaii - the rest failed and had to go back home.

The first immigrants were mainly employed on sugar plantation farms. Each day, they worked for 10 hours from Monday to Saturday and made $17 a month, one-10th of what an average worker would receive in Hawaii.

Top to bottom: A Korean passport issued in 1918; the S.S. Gaelic; Korean laborers rest at a sugar plantation in Hawaii in 1920; and picture brides pose for a group photo in an undated photograph. [JoongAng Ilbo], Provided by the Museum of Korea Emigration History

After King Gojong (1852?1919) signed the Treaty of Amity and Commerce with the United States in 1882, Koreans were free to enter the U.S., but few had the money to travel such a vast distance.

But at the turn of the century, Koreans saw the United States as a means to escape the poverty and political turmoil that characterized the last years of the Joseon Dynasty (1392-1910). They were encouraged by American missionaries in newly formed local Christian communities.

One influential figure was Reverend George Jones. He was serving the Naeri Methodist Church near present-day Incheon, which was founded in 1885 by Methodist missionary Henry Appenzeller.

More migrant laborers followed the initial band aboard the S.S. Gaelic and by 1905, some 7,226 Koreans had sailed across the ocean to the United States and started new lives.

“The Korean community overseas was very powerful and it still is,” said Kim Mi-kyung, a culture and tourism guide at the Museum of Korea Emigration History.

The museum was established this summer by Incheon and Korean residents living abroad to honor the pioneering lives of those who joined the first batch of emigrants.

Since Jemulpo Port is in Incheon, many of the first immigrants’ descendants are based in this area of Korea.

To enlarge the Korean community, it was crucial for the pioneering immigrants to form families within the group.

But most first-generation Korean immigrants were men, according to Kim, the guide, pointing to the black-and-white pictures of the so-called picture brides that are exhibited in the museum.

To give more opportunities for Korean men working in Hawaii to marry a Korean women, the community started sending photos of Korean men to single women back home who were interested in studying abroad or were prepared to live overseas.

In one of the vows displayed at the museum, one of the brides calls her moment of marriage “the sweetest hour for a human pair.”

These families, which started life as an exchange of photos by men and women thousands of miles apart in foreign climes was the beginning of the Korean diaspora, one that would have an even more interesting history during the rest of the century.