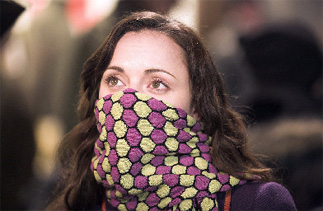 Christina Ricci hides her snout behind a scarf in “Penelope.” [MovieWeb]

I love fairy tales because they always deliver a message of hope. And “Penelope,” a contemporary tale in which a princess overcomes a curse and learns to love herself, does just that.

Penelope Wilhern (Christina Ricci) is a 25-year-old heiress with an unfortunate inheritance. A long time ago, a man in the wealthy Wilhern family got his maid pregnant and deserted her. In revenge, the maid’s mother, a witch, cast a spell on the Wilhern family: their daughters will be born with a pig’s snout. The curse can only be lifted when “one of her own kind” loves her.

Penelope has never been out of the house because her mother (Catherine O’Hara) faked Penelope’s death to protect her from mockery.

The film’s message is obvious - find your inner beauty. And we learn that Penelope’s problem is not actually her snout, but her overprotective mother who never sees her as she is, only what she looks like.

To break the curse, her mother brings in a number of aristocratic suitors. However, once they see her face, all of them flee, some hurling themselves out of windows. Their reaction is funny but a little exaggerated. She is not that ugly or horrible.

What I couldn’t understand was why society couldn’t accept Penelope when a dwarf, newspaper journalist Lemon (Peter Dinklage), had no problems adapting.

Snout aside, Penelope is pretty, petite and charming. So the whole premise of the film was rather shaky. But perhaps the director (Mark Palansky) chose a pretty actress to appeal to young girls who take one little pimple seriously.

Just when it seems that she’s destined to be a pig-faced spinster forever, a penniless aristocrat, Max (James McAvoy), turns up. They talk and find common ground.

It transpires that Max isn’t actually a blueblood but a poor musician who’s addicted to gambling. Lemon, who wants a photo of Penelope with her snout, has hired him to pose as a suitor.

Max is actually “one of her own kind” in that both are trying to overcome personal adversity. As he’s not of noble birth, he tells her he cannot marry her, believing he’s not good enough for her.

Misunderstood and heartbroken, Penelope runs away from home, not knowing and finally not caring if the world will accept her.

No matter how complicated things get, we know that Max is Penelope’s Prince Charming and that we will get our happily ever after, even though both of our protagonists are flawed.

Penelope is a good modern adaptation of a fairy tale, especially for anyone feeling low.