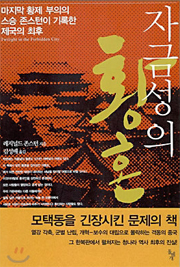 Sir Reginald Johnston, an Oxford graduate, became the first Westerner to tutor a Chinese when he was hired by Xuantong Emperor (Puyi), the last emperor of the Qing Dynasty.

Published in 1934 and translated into Korean for the first time, “Twilight in the Forbidden City” is an eyewitness account of the last days of the Qing Dynasty.

Johnston gives many detailed descriptions of Chinese events in the crucial years of the 1920s and 1930s.

He covers the enthronement of the three-year-old Emperor Puyi, his royal upbringing, the Xinhai Revolution in 1911 and even the exile of the last emperor.

As a strong supporter of monarchy, Johnston speaks of his student, the crowned head of China, with respect and loyalty.

The book is perhaps best known as the inspiration behind Bernardo Bertolucci’s movie “The Last Emperor” in 1987.

The character of the Western tutor that Peter O’Toole played in the movie is none other than Reginald Johnston, the author of this book.

Even after the collapse of the Qing Dynasty following the 1911 Revolution, the Imperial Household survived another 13 years under an agreement with the new Republic of China government.

The republic allowed Puyi to use the nominal title of “Emperor” and promised to support him financially.

Yet, the emperor was deprived of any political or diplomatic power.

After these compromises, the Imperial Household published a royal proclamation in 1912 that declared the establishment of a republic.

This created a unique paradox: a republic with its very own emperor.

The emperor eventually stepped down but the republican government proved to be incompetent in the eyes of the emperor’s former tutor.

“One emperor disappeared and a million of new leaders have emerged,” writes the author.

He says that the frequent power shifts and the attempt to bring Chinese military officer Yuan Shikai to the throne led to the political instability that would wreck the lives of ordinary Chinese.

Johnston started tutoring Puyi in 1919 when the child emperor was only 13. The Englishman records that the last emperor was “intelligent, interested in domestic and international politics and had a sense of humor.”

He said the emperor was polite and never rude. Although dethroned, the boy was still “emperor” of the Forbidden City and he retained more than 1,000 eunuchs.

The emperor had a strict education. His first class started at 5:30 a.m. and finished late at night, every day of the week, with no holidays.

“Instead of preparing for the succession to the Imperial throne, which is impossible to happen, it is important for him [Puyi] to take care of his physical and moral well-being,” Johnston wrote.

The book caused a sensation when it was published because of its insights. Before 1934, people outside China knew very little about the inner court of the dynastic ruling family.

The writer insists that it was Puyi’s own will to go to Manchuria in 1931 to take over as head of state and that he wasn’t forced by Japan’s political maneuvering.

However, contemporary historians dispute this version of events, saying that Japan orchestrated the move after it invaded Manchuria in the same year.


Twilight in the Forbidden City