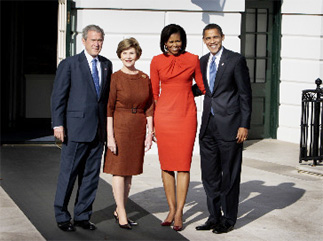 After eight long years of Bush?Cheney rule, Obama’s victory over McCain is a breath of fresh year. It represents a milestone in America’s race relations and perhaps a return to a more rational and humane form of politics in the United States. That would come none too soon given the emerging depression, which I predicted back in my July 2007 column. Nov. 4, 2008 will remain an exceptional moment in our history - one we can be proud of. We are going to have a black family in the White House. Yet with all the bright moments and guarded optimism, real problems lie ahead and Obama’s strengths and weaknesses emerge more clearly.

Barack Obama brings many outstanding qualities to the presidency. He has lived abroad as well as in many places throughout the U.S. As a community organizer and civil rights lawyer, he has keen insight about and deep empathy for those from different backgrounds and modest upbringing. From the very beginning of his U.S. Senate career, Obama has made his opposition to the Iraq War and concern for ordinary families centerpieces of his exceptional campaign.

Bush, McCain, Palin and the Neanderthal Republicans have all often referred to American exceptionalism during the 2008 campaign. However, their version seems to belong to an America that looks down, distantly, ignorantly and arrogantly at the rest of the world. They are forgetting that the country is now facing exceptional difficulties, largely of their own making. Many U.S. citizens are anxious for profound and fundamental reforms to dramatically revamp the nation as we have known it. Nevertheless, some Obama supporters who accepted Barack’s mantra of “change” are bound to be disappointed in the coming months.

In his June 30 column, New York Times columnist Paul Krugman said the junior senator from Illinois would turn out to be either a “transformational figure behind a centrist facade,” or “a centrist figure behind a transformational facade.” He will probably be the latter. If we look at some of his proposals for health care, foreign affairs, and economic policy, his lackluster, moderate grounding becomes more evident.

Throughout the primary campaign, neither Hillary nor Barack uttered the following phrase: single-payer health care. This kind of system, which insures everybody in Canada, Britain, South Korea and so many other countries, would simply not be allowed by Washington, even if the net cost is lower. The insurance industry and HMOs won’t allow it.

Absolute nonsense! The United States now has the worst health care system in the industrialized world with 50 million uninsured and millions of others inadequately insured. A small group of corporate CEOs deem their profits to be the overriding priority over the lives and deaths of millions of ordinary Americans.

A small group of reactionary and occasionally violent Cuban exiles in Miami maintains their tight grip on U.S. foreign policy regarding Latin America. Virtually every other country in the world has normal diplomatic and trade relations with Cuba. We are not at war with this island, yet a trade embargo and travel ban remain in place, even after 45 years of total failure to defeat the Cuban Revolution; the president-elect has so far pledged to keep those going, a foolish mistake that keeps American businesses at a disadvantage.

Closely related to our counter-productive stance on Cuba, Obama’s characterization of Venezuela’s President Chavez as a “dictator” is unhelpful, untrue, and unrelated to real events occurring in South America. In the past ten years, Chavez has been re-elected twice in elections certified by the European Union and the Carter Center as “free and fair.” According to a March 2008 report from the Center for Economic and Policy Research, abject poverty has been halved; access to health care and education is way up. Hundreds of thousands of cooperatives have been initiated while economic growth rates have been double-digit during most of that period.

Don’t expect the corporate media to intelligently inform you of these facts - they won’t. Get on the Internet and reason it out for yourself.

Reasoning out the financial crisis is another matter, and considerably more difficult. We in the United States now have one of the most unfair economic systems in the world. Profits are privatized at the same time losses are socialized. The CEOs of Bear Stearns, AIG, and others in the big FIRE sector (Finance, Insurance, Real Estate) are quite possibly guilty of fraud, embezzlement, as well as other high crimes. The attorneys-general of the states have the right to revoke corporate charters, sell off assets, and in some cases, arrest board members when the public trust has been clearly and repeatedly violated. So far, very few elected officials have called for such steps to be taken. Instead these culpable corporate chieftains are being bailed out with taxpayer money. Republicans and Democrats seem all too willing to forget about the decades of excessive deregulation, mindless tax cuts and reckless lending practices.

In October of this year, the junior senator from Illinois uttered the following words: “Spread the wealth around.” He shouldn’t retreat from such comments. The U.S. economy has had trickle-down economics for almost 30 years, a clear failure since the poor and middle class lost ground to the richest 1 percent or 2 percent, who saw their share of national income go way up. We need a “redistributionist-in-chief” that McCain so ardently condemns.

One of the best ways we can help this redistribution process move in the right direction is for President Obama to vocally and vigorously support the “Employee Free Choice Act.” This bill would make it less burdensome and less risky for ordinary workers to form a union and gain additional members. Barack got considerable financial support from labor unions and corporations - two forces unalterably opposed to each other on this issue. Obama has pledged to sign it into law.

Will he be an incremental centrist like Bill Clinton or a grand reformer in the mold of FDR We’ll soon see how our new president shapes up.


*The writer is a professor at the Graduate School of International Studies, Hanyang University.