Grilled delights from the herby kitchens of Arabia

Grilled delights from the herby kitchens of Arabia

Grilled delights from the herby kitchens of Arabia
Meals in Middle Eastern restaurants in Seoul are affordable and nutritious.

Falafel: An icon of Arab cuisine, falafel is deep-fried balls made of minced chickpeas and herbs topped with a sprinkling of sesame seeds. It tastes savory and has a soft texture. Another way of eating falafel is to wrap the balls in pita bread with vegetables, salad and a sauce. 5,000 won ($3.33) to 8,000 won. 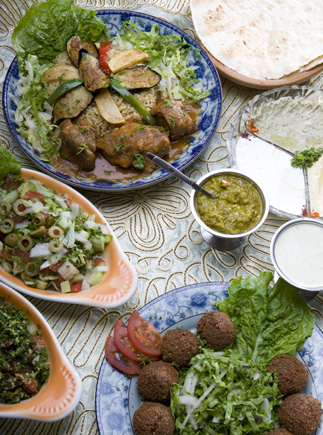 A selection of dishes commonly found in Middle East restaurants around town. By Kwon Hyuk-jae

Hummus: Pureed chickpeas mixed with olive oil and lemon juice. The texture of the peas balances out the sour lemon. Dip your pita bread in the hummus. 5,000 won

Baba ghanoush: A dip made of pureed eggplant grilled without its skin, garlic and olive oil. Eat it with pita bread. 5,000 won.

Tabbouleh: An Arabian salad made of diced parsley, tomatoes and onions with a squirt of lemon juice. 5,000 won.

Kebab: Grilled lamb or chicken that has been marinated and is eaten with vegetables and rice. 10,000 won to 17,000 won

Most of the restaurants in the Muslim neighborhood of Itaewon-dong, Seoul, are within just a few minutes’ walk of Itaewon Station on line No. 6.