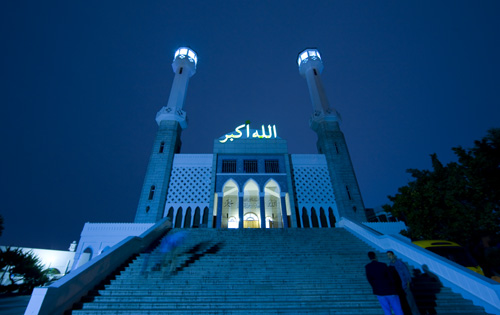 Five-year-old Saera Markel recently dropped by a mosque with her mother. Holding a kebab in one hand, the little girl ran around the mosque compound until her mother stopped her for being too noisy at a sacred site. The girl burst into tears, but then smiled again, because she suddenly remembered that her mom was going to buy her a bag of baklava from the new Syrian bakery on their way home.

In front of an electronics store near the mosque, a man in a fez is trying out different mobile phones that contain digital versions of the Koran. On the streets, the scent of roast lamb doused in fragrant herbs wafts on the winter breeze. The promise of succulent meat dipped in tangy yogurt and wrapped in warm oven-baked bread is blissful. Signs outside restaurants, grocery stores, electronic stores, bookstores and travel agents are in Arabic and Pakistani and Bangladeshi merchants selling coconuts and other foods shout out “Jalla jalla!” meaning “Hurry, hurry.” 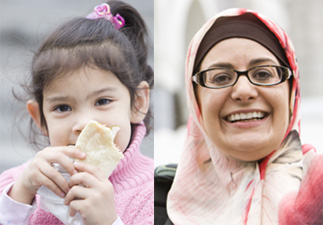 Saera Markel in the Itaewon mosque; Victoria Kennedy from the U.S. wears the hijab in the mosque shortly after arriving in Seoul from San Diego

This could be a street scene in Syria or Dubai, but it’s actually an everyday glimpse into the neighborhood in Itaewon-dong near the central mosque in Seoul.

Here, you see familiar posters of teenage girl bands like the Wonder Girls in the windows of convenience stores but the women passing by on the streets are most likely wearing a hijab.

Korea may well be a homogenous society but the Middle East is only a few subway stops from Seoul City Hall. You won’t need a visa, a flight ticket or a passport, just the energy to climb out of the subway and up the hill toward the Seoul Central Mosque. And it wouldn’t hurt to learn the Arabic greeting, “Salam alaikum,” which means “peace be upon you.”

Kim Seong-du, a Pakistani Muslim who was naturalized as a Korean, drives from Uijeongbu, Gyeonggi, with his 6-year-old son to the mosque every Friday, when the neighborhood is at its busiest. No matter if you’re a factory worker or a diplomat, a Muslim is a Muslim and they pray together. 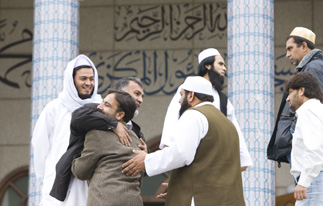 Worshippers greet each other at the mosque after Friday prayers

A sanctuary for women is on the second floor where an Egyptian woman in a hijab is praying. Next to her is a Muslim from the United States who arrived at Incheon International Airport at 6 a.m. that morning. Victoria Kennedy rushed straight from the airport to the mosque. She wanted to form a Muslim community in San Diego, but it was very difficult, she said. She envied places like Itaewon where Islamic food could be easily bought.

Ali Kim, who runs an Islamic butcher’s shop near the mosque, says he joined the mosque community to respect Islamic laws and rituals. He’s been a Muslim for 30 years.

Lee Haeng-rae, the owner of Imam, an electronics store, says the neighborhood began to change notably two or three years ago. “It seems like there’s a new store sprouting here every morning,” she said. More Islamic restaurants are opening and younger visitors flock here. 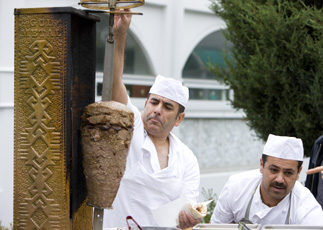 One student was making time to find out more about Middle Eastern culture. Touching a hijab, which costs 10,000 won ($6.92), he said he will come back because “there are lots of new things and good food.”

It’s no surprise that world cuisine is available in Itaewon, but the Islamic community is one of the most visible and colorful.

Lee of Imam sees this in the growing population and the character of the Muslims in Seoul.

Muslim food has to be halal, prepared according to Muslim dietary laws. A notable example is the slaughter of animals, which are drained of blood since it is forbidden to eat blood. Halal restaurants spring up wherever significant Muslim communities exist. 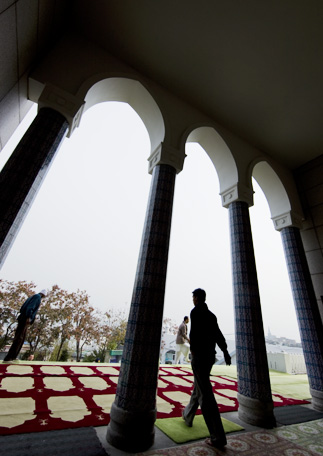 A view from the mosque overlooking Itaewon. By Kwon Hyouk-jae

Halal is also the name of a supermarket run by Woodin Habil, 35, from Bangladesh. It’s one of four halal markets in the neighborhood and stocks lentils, chickpeas, cheese, lamb and chicken. Restaurants here carry certification of their halal status.

After the service at the mosque, the nearby shops soon fill up. On a recent Friday afternoon Mohammad Bin Saif, 21, a computer science student from Malaysia, was weighed down with a week’s supply of lamb and chicken.

“It’s heavy, but it’s safe to buy it here, and it’s a good place to feel a sense of the Muslim community,” he says.

Generally speaking, Koreans are not at all familiar with Arabic cuisine.

“Arab food uses a lot of herbs like cinnamon, cumin and saffron, which might seem new, but you get addicted after while,” said Paul Schenk, the executive chef of the InterContinental hotels in Seoul.

Schenk gained his culinary experience in Dubai and often visits Petra, a restaurant in Seoul run by Jordanian Yaser Ghanayem, 38, who has an MBA from Australia. He said his place specializes in traditional Arab cuisine using only herbs sent from home by his father. The restaurant has a second branch near the Itaewon fire station called Petra Shwarma Palace.

Ghanayem is concerned about the growing number of Arabic restaurants in Seoul that sell alcohol, which is banned under Islamic law. But the chef of a Moroccan restaurant near Itaewon explains that “you can’t do business in Korea if you don’t sell alcohol.” The issue, he believes, is whether you serve the food right.

Ali Baba, run by a former member of staff from the Egyptian Embassy in Seoul, also sells alcohol.

If you’re not familiar with Arabic food, you can try the Foreign Restaurant in Itaewon, which serves a mix of Middle Eastern and Indian food. You can also sample Middle Eastern cuisine in Dubai, which lies across from the fire station.

If you are not in the mood for anything too heavy, Itaewon is dotted with kebab joints, small and big. Around 8 p.m. every evening Mohammad Hasan parks his food truck on a street across from the fire station and doles out his Lebanese kebabs, which cost 3,000 won a skewer.

And there’s usually a line of customers outside the Turkish kebab shop Sultan on the corner of Ihwa Market. Omer Yilmaz, the owner, can tell you stories about Korea that he heard from his grandfather, a veteran of the Korean War. Also by the market is Persian Land, an Iranian restaurant.

A few steps up the hill from the main street of Itaewon, you can find what is thought to be Korea’s only Islamic bookstore. A green sign in Korean reads “the guidance to truth.” The shop was opened by a Muslim from India who wanted to help other people understand Islam better.

“A lot of Koreans are often mistaken about Islam,” he says. “The problem is that they are not trying to understand, and that leads to misconceptions.”