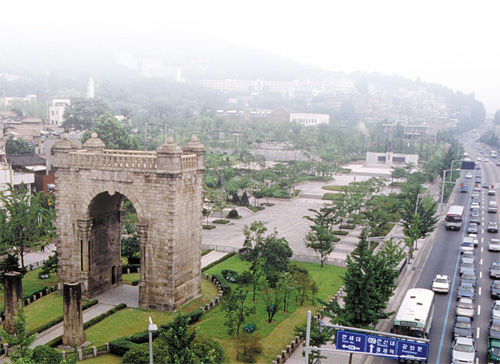 Five elderly women bundled up in hats, mufflers and gloves sat themselves in front of the Japanese Embassy in Seoul at noon last Wednesday.

The pensioners are among the last of the surviving Korean comfort women, a euphemistic term for women forced to provide sexual services to Japanese soldiers during World War II.

They have been meeting in front of the embassy every Wednesday at noon since 1992 to demand that Japan apologize and compensate the women for coerced wartime prostitution.

But today the women and their supporters, mainly activists, professors and students, are facing another battle, one that has pit them against the men who fought for Korea’s freedom against Japan during the colonial period (1910-1945).

This is an artist’s rendition of how the museum devoted to comfort women issues would look in Independence Park. Provided by Korea Council for the Women Drafted for Military Sexual Slavery by Japan

Earlier this month, former independence fighters and their descendants held a press conference to harshly denounce plans to erect a museum for the comfort women in Independence Park in Seodaemun District, northern Seoul.

The press conference was organized by the Korea Liberation Association.

“The proposed museum denigrates the independence movement and the men who gave their lives as patriotic martyrs for the liberation of Korea,” said Kim Yeong-il, the association’s president, at the Nov. 3 press conference. 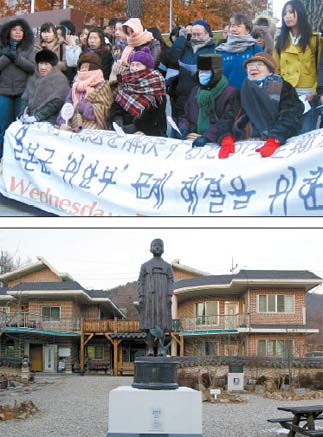 Top: Former comfort women and their supporters reiterate their support for the planned museum within the Independence Park at the Wednesday rally this week. Above: House of Sharing in Gwangju, a shelter for former sex slaves, uses part of its facilities as a museum on the issue. By Kim Hyung-eun, [JoongAng Ilbo]

“The museum will surely create a false image about our history by highlighting our suffering rather than our many military achievements,” Kim added.

Since 2003, the Korean Council for the Women Drafted for Military Sexual Slavery by Japan has been hoping to build the museum, which is to be called the War and Women’s Rights Museum. The aim is to raise awareness about sexual slavery during the colonial period. Last month, the Seoul city government gave the green light to the project.

If constructed, it will be Korea’s first museum solely dedicated to comfort women - both during the war and after - according to the council. Although House of Sharing in Gwangju, Gyeonggi, has an exhibition area about the issue, it functions as both a shelter and a museum.

Needless to say, surviving comfort women are furious with the freedom fighters.

“Who are they?” Gil Won-ok, 81, shot back when asked what she thought about the conflict during an interview with the JoongAng Daily at this week’s rally. “Aren’t they freedom fighters who fought for the weak?” Gil asked indignantly. 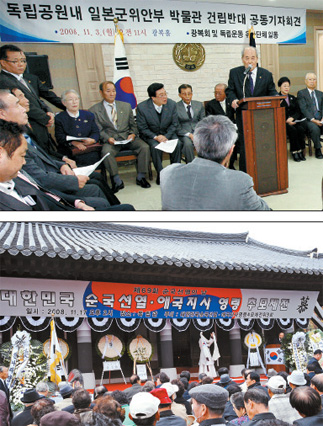 Top: The Korea Liberation Association and 32 independence movement-related groups held a press conference to denounce the plans to build a museum about comfort women within Independence Park. Above: For independence fighters and their descendants, the park is a holy ground where they hold an annual memorial ceremony. [JoongAng Ilbo]

Gil was taken to brothel in a troop compound at the age of 13. Tears welled up in her eyes as she relived the painful experience. She’s told her story thousands of times around the world - at universities in the United Kingdom, the Netherlands and Belgium most recently - to try to force Japan to offer a formal apology.

“I like the site [Independence Park]. The park also has Seodaemun Prison where the Japanese tortured Koreans. So it’s appropriate to have a museum about us [there],” the 81-year-old argued.

On the day the Korea Liberation Association held its press conference, the Korean Council for the Women Drafted for Military Sexual Slavery by Japan also held a press conference denouncing the association’s opposition against the museum planned for Independence Park.

Their statement argued that “shedding light on how Japan violated the rights of the comfort women as well as how survivors fought to tell the world what happened are the true freedoms that our independence fighters fought for.”

The council has gathered similar statements from various organizations such as Corean Americans NGO USA (CANGO USA), the Korean Women’s Alliance and the Association of Korean History Teachers. At Agora, a major online discussion site operated by Daum, more than 3,500 people petitioned for the museum project to go ahead.

Acknowledging such outcries and not wanting to aggravate the already heated debate, the Korea Liberation Association has adopted a more softer stance. An official at the association emphasized in an interview with this newspaper that it is not against the museum, but it is concerned about the location. He said that the association’s stance has changed slightly: It will not seek to block the construction of the museum, as previously declared. Instead, the group will work together to devise an alternative plan.

Meanwhile, Kim Sam-yeol, president of Korean Association for the Bereaved Families of the Men of Merit for Independence, said in a phone interview with the JoongAng Daily that he is for the museum and even “the museum in the park.”

“[I’m concerned because] Independence Park is a sacred place for us,” said Kim. “But I think the vision of the museum is appropriate with the spirit of the park. So I think it is O.K. for the museum to be built there.”

Kim, whose grandfather, father and uncle were all Men of Merit for Independence, admitted, though, that he’d prefer the museum to be built near Seodaemun Prison, not on the planned site, Independence Building, which houses 3,000 memorial tablets for each of the independence fighters.

However, it doesn’t look like the majority of the descendents of the independence fathers are going to be on the same page any time soon. Some are still refusing to accept the plan in its present form.

“I think it’s great that they will build such a museum, but I think it should be built in a different place as it doesn’t fall in line with the characteristics of Independence Park,” echoed Ryu Geun-chang, the president of the Yu Gwan-sun Memorial Committee.

In fact, the “characteristics” of the Independence Park today are threatened by issues other than the museum, which explains why the descendants are determined to fight projects that, in their view, fail to “directly” relate to the independence movement.

There have been frequent reports of people drinking in the park and homeless people sleeping there. The room that houses the memorial tablets is too small, and to make matters worse, it’s covered in cobwebs and mold.

The Seoul city government’s plan to build an outdoor stage in the park last year only fueled the indignation of independence fighters and their descendants. According to an unnamed government source, the plan has now been shelved due to strong opposition.

This August, the Seoul city government said it had earmarked 23.4 billion won ($16,173,982) for renovations that would include a public square at the entrance for people to gather and chat.

But this wasn’t enough for the independence fighters and their families. On Monday, a memorial day for patriotic martyrs, the Korea Liberation Association held a rally at the park, demanding that the government designate the park as “a sanctuary” and provide management and maintenance suitable for a sanctuary.

Currently, there have been several unofficial contacts between independence fighters, the former comfort women and the Seoul city government.

According to the original plan, the construction for War and Women’s Rights Museum is slated to begin in March next year.

So far, the Korean Council for the Women Drafted for Military Sexual Slavery by Japan has managed to raise 1.7 billion won in funds, half of the expected costs for the construction, which was the precondition set out by the Seoul city government for approving the plan for the museum.

But there’s still a long way to go. In addition to winning over the independence fighters, the council has to raise a lot more cash, which won’t be easy.

Many of the companies approached rejected the overtures of the council, saying that the project didn’t “fit in with the company’s image.”

The council assumes that these firms are worried about losing trade with Japan.

“We’re not even considering changing the location as an option at this point,” said Gang Ju-hye, a director at the council.

“Over the last five years, we’ve come so far, going through all the required administrative procedures in order to secure the go-ahead from the Seoul government. We can’t imagine going through all of this again. It’s just beyond our capabilities.”

Gang understands very well how Independence Park has been neglected and mistreated over the years.

“We hope with our museum, the park can develop in the future as a major history education site,” she said.