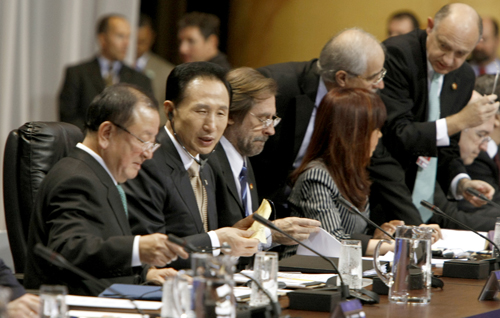 President Lee Myung-bak at the G-20 summit on Nov. 16. He sought to be an intermediary between developed and less developed countries. [KPPA]


The Washington conference of leaders of the Group of 20 nations representing the major economies of the world signifies the seriousness of the current global financial crisis.

There is now broad consensus that 2009 will see a global recession.

The Republic of Korea was prominent at the conference. President Lee Myung-bak emphasized being an intermediary between the largest economic nations and the less developed.

South Korea’s current position as a principal industrial power, having experienced very rapid economic development over the past half century, and its location in Asia should all help it to facilitate such a role. The fact that the Secretary General of the United Nations is Ban Ki-moon of South Korea reinforces the country’s possible influence.

Albright visited North Korea during the Clinton administration, the first such visit by an American secretary of state.

Immediate reactions to the conference, however, have included criticism of general statements about cooperation which lack policy specifics for resolving the current difficulties.

However, participants did commit to resisting protectionism, promoting transparency and accountability in commerce, and much stricter regulation of banking and finance.

The history of international economic cooperation in the 20th century indicates success reflects sustained work over the long term.

There are usually no quick solutions to vexing structural problems, which is what the international economy is currently facing.

The weekend conference should be viewed as a sensible beginning; expecting immediate dramatic outcomes is utopian in light of past experience.

Many observers draw parallels between the current period and the Great Depression of the 1930s.

There are very significant differences between that era and our own, but durable lessons as well from the earlier period.

London’s highly protectionist imperial preference system cut off the enormous British Commonwealth and Empire in economic terms from the rest of the world.

In addition to reconfirming opposition to such national go-it-alone policies, the recent G-20 conference represents a notable expansion of national participants.

In the past, such meetings have focused on the G-7, the economically sizable highly developed nations of Canada, France, Germany, Italy, Japan, the United Kingdom and the United States.

In recent years, Russia has also been included, reflecting that nation’s geographic proximity, military power and natural resources rather than comparable economic infrastructure or development.

The current emphasis on the G-20 indicates consensus that a very small group of nations can no longer effectively lead the global economy.

Brazil, China, India and other developing nations are rapidly evolving into major manufacturing powers, along with traditional roles as important suppliers of raw materials and other natural resources.

Since the Second World War, regular comprehensive trade negotiations have expanded trade in both goods and services, providing a generally stable foundation for smaller gatherings of officials from the major economies.

Among the most successful was the Uruguay Round during the Reagan administration, spearheaded by U.S. Trade Representative Clayton Yeutter.

In 1944 at Bretton Woods, New Hampshire, senior representatives of the Allied Powers hammered out the economic structure for the post-war period.

New institutions to operate under the umbrella of the United Nations included the General Agreement on Tariffs and Trade (now the World Trade Organization), the International Monetary Fund and the World Bank.

Although their functions have changed, especially after the Nixon administration in 1971 ended fixed monetary exchange rates, the institutions have proven remarkably durable.

The policy makers who established them planned for the long term. The original United Nations vision was in the Atlantic Charter, announced by Prime Minister Winston Churchill and President Franklin D. Roosevelt after their epic summit held several months before the attack on Pearl Harbor.

Many associate FDR more closely than Churchill with the UN. The British leader, in his comprehensive history of World War II, notes that the American wrote the first draft of the Charter.


*The writer is Clausen Distinguished Professor at Carthage College. He can be reached at acyr@carthage.edu.