A tiny town with a huge following

A tiny town with a huge following 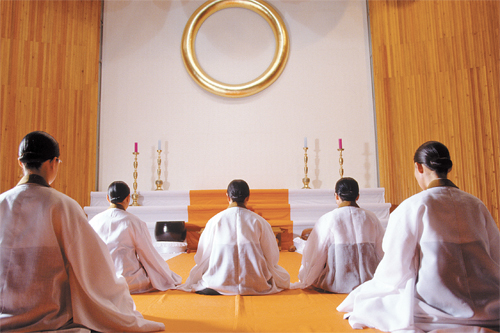 YEONGGWANG, South Jeolla - Like many a small-town hero who later conquered the world, Park Chung-bin’s history began in obscurity, almost a century ago here in the peaceful township of Baeksu in Yeonggwang County. This area, with a population of less than 6,000, is unremarkable apart from its production of dried croaker.

But it was here that Park, the founder of Won Buddhism (Wonbulgyo) and otherwise known as the Great Master of Sotaesan, was born to a family of middle-class peasants, and built a base for his religious following early in the 20th century.

Yeongsan Sacred Site, as Park’s birthplace is now called, is the most recognized out of four major relics representing Won Buddhism, an indigenous form of Buddhism that has 500 temples around the world.

Later in life, Park chose to set up his headquarters and first temple in Iksan, a city also in Jeolla with a larger population and better access to transportation. But most Won Buddhists still prefer Yeongsan as a pilgrimage site during major religious celebrations. 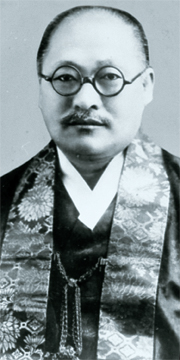 The sacred site at Yeongsan covers a modest compound containing the founder’s birthplace and monuments where Park is said to have questioned universal phenomena at the age of seven while looking at a clear sky. But Park’s influence stretches out to the entire township.

In 1910, Park initiated a major land reclamation project that was aimed at modernizing his impoverished town and attracting a religious following. Approximately 853,992 square feet [79,338.5 square meters] of the township’s sea was turned into farmland during this period. When the construction was completed a year later, Park had become his town’s hero.

The main site of Yeongsan is dominated by a stone monument commemorating the great enlightenment of Park on the morning of April 28, 1916, the official foundation day of Wonbulgyo.

After his enlightenment, Sotaesan mobilized a religious order with nine followers, and started a social reform program, which included eradicating poverty, illiteracy and superstitious beliefs. He also stressed the notion of “convulsion of consciousness” which he saw as a way to save humanity from irrational thinking.

Part of Sotaesan’s religious expansion relied on forming an economic union which gathered the savings of individuals gained from quitting unnecessary habits such as drinking and smoking.

This union later became so strong that the Japanese colonial government conducted surveillance on Park’s gatherings, wondering if he might be using illicit aid from independent activists.

This persecution put pressure on the group, and led its religious following to strengthen its militant spirit.

In 1919, the year when independent activists took to the country’s streets in resistance against the colonial government, Sotaesan and his nine followers signed an oath, four words written in blood - “sa-mu-yeo-han” - symbolizing the willingness of each adherent to die for righteous deeds and the good of humanity.

The house where they signed their vow is located on the Yeongsan compound. It serves as a testimony of Won Buddhists, who often consider themselves spiritual supporters of the nation’s independence movement and an advocate of public good over personal interest.

“The whole essence of the religion boils down to the notion that one cannot exist without the other,” says Won Buddhism’s Reverend Kim Seong-geun, in Yeongsan.

“That aptly suggests that everything that goes around in this world will have some kind of influence on all of us. In a way, it resembles a contemporary view of an ecological life.”

But more visibly, the biggest achievement of Won Buddhism showed in their effort to nurture areas of social services that were alienated from mainstream society, notably in their contribution to education and oriental medicine.

As part of the compound, Yeongsan houses the first registered “alternative” school, which would later become Yeongsan Seongji High School.

The school was originally set up in the 1970s during the country’s rapid industrialization to cater to maladjusted students who were expelled from school and had no choice but to work at factories.

Medical missions also served as an effective way to spread Won Buddhism, and continue to do so, especially in underdeveloped countries today.

Similar to the way in which Western medicine was introduced by Christian missionaries here, Wonbulgyo set up a university specializing in the field, and opened clinics under their sect’s supervision.

At the sacred site and further from the stone monument is Sotaesan’s birthplace, a straw-thatched house which was destroyed and restored in 1971. Today, only trees surround this isolated house. But a well nearby is testament to the fact that the area was once populated by farmers. A step back from the house, the sanctuary is surrounded by lush mountains with notably steep peaks.

Just above Sotaesan’s birth home is Okryubong, which is named after a mythical figure. Legend has it that the peak is shaped after a young woman’s hair worn in a bun.

Won Buddhists see this as a sign that the woman is tidying herself to wait for a man of unusual ability who will come to change the world - their great master.

Historically as well, Baeksu Township marks a significant vantage point into the history of Buddhism. The area neighbors Beopseongpo, a port where Buddhism first arrived in Korea in the Baekjae Dynasty during the Three Kingdoms period.

Beopseongpo was originally named Amupo derived from “Amita Bul” - a Buddhist reference to “awakening.” Yeonggwang takes great pride in its history as a spiritual center of Buddhism.

The highlight of the pilgrimage involves a visit to the main sanctuary.

The facade of the temple looks nothing like a religious edifice; it is a minimalist wooden structure built in the colonial style under the Japanese regime.

On the wall slightly above an altar inside the temple hangs a golden tenet of Ilwonsang, a central symbol of Won Buddhists which conveys the notion of a unitary circle.

Overall, the minimal display of the Wonbulgyo temple adequately encapsulates the spiritual core of Won Buddhists, which stress the teachings of Buddha and the wisdom of his followers.

The absence of religious icons and visual ornaments is a sign that Won Buddhism transcends the custom common among organized religions to deify a single spiritual leader.

[Sacred places in Korea Series]
1.A final resting place
2.A little-known independence fighter
3.The persecuted roots of Catholicism
4.Seon and the city