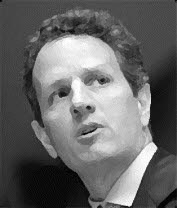 On Nov. 21, 1997, an American in his late 30s boarded a flight from Manila, Philippines to Gimpo, Korea. Upon landing, he met immediately with Lim Chang-yuel, then the newly appointed deputy economic minister.

In a respectful, soft voice, the American visitor warned that it would be a problem if we didn’t keep our promise to seek a relief loan from the International Monetary Fund. At around 10:20 p.m. on the same day, Lim caved in.

The young gentleman was Timothy Geithner, who was recently named the new U.S. Treasury secretary-designate.

In 1998, he took on Japan’s Ministry of Finance and curbed the strong yen.

On Wall Street, Geithner is known as an economic hit man. In March as the president of the New York Federal Reserve Bank, he made a call to the chairman of Bear Stearns. He simply told the chairman to hand down the company to J.P. Morgan within 48 hours.

On the evening of Sept. 13, he had blood on hands again, when he called 30 Wall Street CEOs into his office and announced that Lehman Brothers would be left to go bankrupt. Geithner stared down Merrill Lynch CEO John Thain across the table, the CEO turning deadly pale as he handed over his company to the Bank of America on the spot.

On Oct. 13, presidents of nine banks were called in to the U.S. Department of the Treasury. They were taken aback by Geithner’s demand that they hand in part of their shares to the government. He threatened that they wouldn’t be allowed to leave the room unless they signed contracts. The CEO’s faces soon lit up, however, when they heard the huge sums of rescue money mentioned - $25 billion each to Bank of America, J.P. Morgan and Citigroup and $20 billion to Wells Fargo.

Harvard graduates, such as Robert Rubin, Lawrence Summers and David Lipton, used to dominate the U.S. Department of the Treasury. Geithner, however, doesn’t belong to the same networks. He has worked for both the Bill Clinton and George W. Bush administrations and achieved success. His secret: gentle manners and brilliant ideas.

He plays the bad guy whenever a crisis breaks out but comes out with no grudges held against him. When the news broke that he was designated as the new Treasury secretary, Korea and Japan, countries that he both gave a hard time, were happy.

Geithner grew up in Asia and speaks Chinese and Japanese in casual settings. It hurts more if one is hit by an acquaintance. Behind Geithner’s gentle face, the cold instincts of a judge lie hidden. We’d better be more careful from now on.