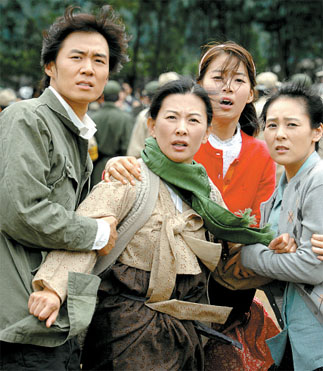 Han Ji-hye, second from right, in a scene from “East of Eden.” [MBC TV]

Model-turned-actress Han Ji-hye is currently absorbed in being Ji-hyun, her character in the MBC TV soap opera “East of Eden.”

Ji-hyun is a tragic character who is destined to leave her lover Dong-wook (Yeon Jung-hoon). In a particularly gut-wrenching twist of fate, she was forced to have a child with Myung-hoon (Park Hae-jin), the son of the head of a large construction company who killed Dong-wook’s father.

The drama has now hit its climax, with Ji-hyun turning into a charismatic business woman who helps run the company.

The 50-episode series, which airs every Monday and Tuesday at 9:55 p.m., attracted 25.6 percent of the viewers watching television at that time last week.

“Ji-hyun is an attractive character,” Han, 24, said. “It’s like peeling the layers of an onion - her life is full of surprises.”

Five years since she began her career as an entertainer, Han says she’s learning lessons in love and life through the character of Ji-hyun.

Though Han is more than thankful now, at first, she hadn’t wanted to take the role. When she received the script for East of Eden, she had just finished with the KBS daily drama, “I Hate You, But It’s Fine.”

That soap was a turning point for the actress, helping her charm Korea’s middle-aged television audience. Having done so, Han became worried about ruining her image by taking the role in the new series. The spotlight had weighed heavily on the young woman’s mind, making her question her identity as an actress and as a human being.

She wasn’t confident about her ability to play the Eden role, but started reading the script anyway. She read eight episodes in a row, staying up all night to do so.

The next day, Han went to a practice read-through and found herself becoming more absorbed in the role. When performing Ji-hyun’s lines, she couldn’t help the tears from falling.

Now that the drama is halfway through, how confident is she about the role?

“I was definitely destined to appear in this drama,” she said.