There’s no doubt that actor Park Jung-hun is a first-class speaker, and one with a good sense of humor to boot.

Whenever the 42-year-old goes on stage at a film festival, whether as host or award presenter, he creates a pleasant atmosphere with his amusing speeches.

Park says ideas pop naturally and effortlessly into his head, showing him to be a natural at grabbing his audience’s attention.

It comes as no surprise that this eloquent actor will host a talk show. Set aside some time to listen to some of Park’s chitchat and humor, starting Dec. 14 on KBS 2TV. “The Park Jung-hun Show, Sunday Night in South Korea” will air every Sunday at 10:25 p.m. 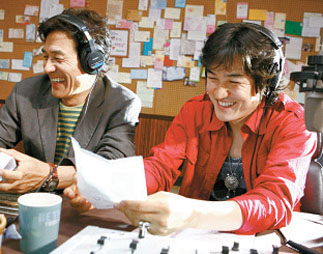 This is a first for Park to host his own television show, though he has received numerous calls from television producers. He gave his reasons for waiting until now. “I always had the desire to host a talk show but I wanted to wait until I turned 40 when I would be more mature,” the actor said.

Park sees the 40s as a magical period in life.

“It’s a point in life when you have both the youth and experience from your 20s and 30s,” he said. “This is the perfect age for me to meet all sorts of different personalities and talk about life.”

A good actor should have a warm heart to fully understand others’ minds, according to Park. Being a good talk show host isn’t far from the definition.

The show’s producers and staff chose Park, trusting his good understanding of others. And of course, his witty manner and volubility were factors too.

The show’s priority, however, isn’t so much centered on raising laughs but on triggering communication among generations and communities.

In Park’s view, conflict comes largely from a lack of communication.

“You should listen with your heart rather than with your ears,” he says, emphasizing that this is an essential quality for a good host.

“It’s important to put yourself in another’s shoes, be considerate and humane while hosting a talk show.”

The show is getting a lot of attention since it is something of a revival of Korea’s classic and traditional form of talk shows that disappeared after 2000.

“Trivial episodes and stories related to celebrities are definitely entertaining and fun,” he admits. The problem is that most entertainment shows pursue them too much, he says. “Many hosts focus too much on amusement rather than listening sincerely to the celebrity speakers and guests,” Park said.

To host such a show, curiosity is important, which Park certainly has. He has always been curious about his neighbors. He says he finds charm in what others think.

Park is also a bookworm. He reads three dailies every morning and likes to read high-quality columns and analytical articles.

Guests for the upcoming show are from different fields ranging from politics, economy and culture.

As Park has a wide range of acquaintances, he told the show’s personnel that when they encounter difficulty getting guests for the show, they can always mention his name and use him for publicity.

“While the daily news takes on the role of a father, the [Park Jung-hun] show will take the role of a mother,” the actor said. “The show will look into society and give hope and encouragement to those who are emotionally hurt.”