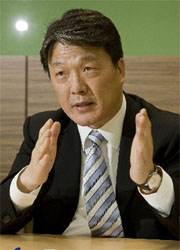 Seoul faces a daunting task of coordinating its diplomatic policies with the incoming United States administration under Barack Obama. The first Korea-U.S. presidential summit, yet to be scheduled, will be a critical opportunity to achieve the goal, said Kim Byung-kook, former senior presidential secretary for foreign affairs and national security.

Kim, a 49-year-old politics professor at Korea University who served in the Blue House from February to June, talked about how Korea-U.S. ties are likely to change under the new U.S. president during a three-hour interview with the JoongAng Ilbo. Kim majored in economics at Harvard University, where he also earned his master’s and Ph.D. in political science. He is considered one of the few Korean academics with extensive networks among leading political scientists and government officials in the United States.

Q. What changes do you think Barack Obama will bring to American society?

A. I’d say it’s not Obama who will drive change, but the economic and diplomatic fallout from the Bush administration that necessitates new changes. I’m not saying Obama’s leadership is not important. He is very talented in putting together various values and arguments and integrating them into one framework of his own. He pledged to mend the country’s ideological rift that has widened under President Bush and President Clinton, based on change and social integration. Obama takes a liberal stance on social issues, a centrist stance on the economy, and is a multilateralist when it comes to diplomacy.

You have to extricate yourself from the traditional Korean ways of thinking in order to understand Obama’s philosophy. His political career prospered with the support of white voters, not black voters. He lost miserably in the 2000 elections for a seat in the U.S. House of Representatives for Illinois, when 65 percent of the electoral constituents were black voters. But in 2004, he achieved a landslide victory in the Senate seat election at a place where 80 percent of the voters in the district were white. Obama’s political messages are exactly in line with the values of white middle-class voters.

Tell us more about how Obama performed in Washington and his political leanings.

Obama largely focused on human rights issues when he was a senator, supporting health insurance coverage for all Americans, rights of women and sexual minorities, and stem cell research. His stand on social issues was definitely on the left. Obama’s legislative voting history during his tenure as a senator indicated he was ranked 16th among 100 left-leaning lawmakers in his first year in Washington. His ranking rose up to 10th in his second year and to first in his third year. Obama is in the very mainstream of liberalism in the northeastern region of the United States, the very mainstream of U.S. society. But he stands in the middle when it comes to economic issues, as he repeatedly highlighted the importance of “forming consensus” and bipartisan political consensus in his memoir, “The Audacity of Hope.”

Obama has chosen Hillary Clinton, who was once his political rival, as his secretary of state and recognized John McCain, a Republican, as a partner for political administration. It looks like he is demonstrating the principles of political tolerance and inclusion.

It is easy to listen to the voices of joy in a time of administration change, but Obama will listen to the voice of the silent as well. In particular, he faces a daunting task in appeasing Republican voters’ frustrations and feelings of alienation. Hillary, who has solid support within the [Democratic] party, is likely to become a very independent secretary of state. The designation of Hillary Clinton is quite a risky venture for Obama; it may be politically safer to leave Hillary outside the cabinet. It can effectively send the message of integration and tolerance to the public. It is also better for Hillary, who may find the secretary of state position far more attractive than a Senate seat, as she revealed an intention not to run for president again.

Do you think it will be possible for President Lee Myung-bak to display the same leadership of integration and tolerance toward his former presidential rival Park Geun-hye?

It will be the biggest wish of all Korean voters that our legislators form a bipartisan cooperative platform beyond the boundaries of political parties. I think all the parties should find a model of effective coexistence rather than constantly creating factions, for instance between ruling party and opposition party or those who are in the party’s mainstream and those who are not, and constantly creating tension.

How do you think Obama’s liberal political principles will be reflected in his Korea policies?

In Korea, one is defined as a liberal or a conservative based on opinions one has on inter-Korean relations and unification. But the liberals in the U.S. focus on human rights issues. I do not believe that the Obama administration will take a soft stance on the North’s human rights issues. In the area of national security, there will be more issues of financial costs than of political or ideological principles. Given the financial difficulties the U.S. is going through today, the country is likely to make demands that South Korea contribute more to maintain military operations here.

Obama has been actively voicing opposition to the Korea-U.S. free trade agreement and urging South Korea to open its auto market.

I do not view Obama as a protectionist. Many of the likely candidates for major positions in the cabinet and the White House are figures long known for their belief in globalization and open markets. Indeed, Obama recently made a remark that indicates a hope to get the Korea?U.S. FTA ratified after September next year. It must be his choice to be given early stacks of domestic issues to solve. Once the U.S. government is able to implement fast and bold corporate restructuring of the Big Three companies in the auto industry, the auto issue will not likely be a major obstacle for congressional ratification of the FTA. Many of the senior aides in the incoming Obama administration support ratification of the pact, so we have to convince Washington that Korean automakers will create many jobs for Americans by building more plants there.

Senior legislators of the Grand National Party will visit the U.S. next month. Tell us how much progress the government has made in expanding ties with the Obama team.

The most important thing is the first Korea-U.S. presidential summit, which will probably take place within six months into Obama’s tenure. We have to hold a successful summit at all costs and not repeat the disastrous 2001 summit between former president Kim Dae-jung and President Bush. Timing is not important in the first presidential summit; what’s most important is how well we prepare before the actual summit and how the two leaders get to know each other and get to know each other’s views. A lot of U.S. lawmakers and state governors are likely to join Obama’s first cabinet, so Korean lawmakers should make more efforts to befriend them.