Louis Malle: a dip into the dark side

Louis Malle: a dip into the dark side 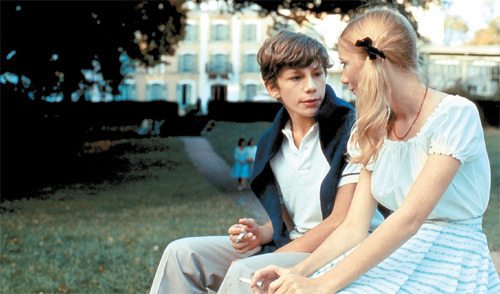 Benoit Ferreux, left, and Lea Massari in Louis Malle’s “Murmur of the Heart.”


For an arthouse filmmaker, the name Louis Malle resonates with surprising familiarity to many Koreans. Malle, a member of the French New Wave, has a history of provoking local audiences with his eclectic cinematic tastes.

Earlier in his career, he annoyed local fans of Brooke Shields - one of the most beloved Hollywood actresses among Korean audiences of the ’80s - by putting her in the role of a prostitute in his 1978 movie “Pretty Baby.” Later, Malle made a personal visit to Korea and confronted authorities of the local movie rating board when his film “Damage” was banned from screening in Korean theaters.

The local board jury explained at the time that the idea of the film’s heroine having sex with her lover and his father was absurd, saying, “This is not a Western country.”

Two years later, the film was released after the local importer cut out a significant portion of the film’s nude scenes. But the tragic pathos of the film created a group of loyal fans of the director and the film’s male lead, Jeremy Irons.

But while Malle’s sense of mise-en-scene was met with rave reviews from critical circles - often compared to Robert Bresson’s camera aesthetics - the content of his films always aroused public controversy, questioning our sense of morality and guilt.

Malle’s films dip into the darker corners of human nature, subvert social conventions and explore the tragic cost of letting your desire get the best of you.

His debut feature film “Elevator to the Gallows” (1958), also the first Western film to feature jazz music, was classic hard-boiled film noir about a man trapped in an elevator after murdering his lover’s husband. “The Lovers” (1958), a tale of a married mother infatuated with a young man, was banned by the Vatican and caused uproar in some American states when it was released in the late ’50s.

Typical elements of a Malle film include French bourgeois family life and a mother-son relationship laced with Oedipal themes. Many speculate that his chosen topics reflect heavily on his own life. Born in an affluent middle-class family, Malle attended a strict French Catholic boarding school. His childhood experiences are hinted at in many of his films, including “Goodbye Children,” the winner of Golden Lion Award at the Venice Film Festival. It explores memories of the Holocaust through the eyes of a young boy in a Catholic boarding school under the Nazi occupation of France.