‘A Quiet Man’ delves too far into dullness

‘A Quiet Man’ delves too far into dullness 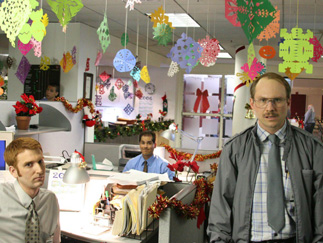 Career dissatisfaction is one of the richest source materials for pop culture these days. Such soul-sucking drudgery has found its way onto our screens in the form of the cubicle cells of Initech in “Office Space” and the futile labor of Dunder Mifflin employees in the TV series “The Office.” Then there’s the panic attack-inducing work environment of James McAvoy’s character in “Wanted” and the mind-numbing number crunching of Edward Norton as an actuary in “Fight Club.”

And in all of the above - albeit to a lesser degree in The Office - the employees break out of the confines to damn The Man and reclaim their lives.

“He Was a Quiet Man,” written and directed by Frank Cappello, tries desperately to fit into this genre. It revolves around similar themes of job-hating and self-loathing, but its greatest misstep is its choice of protagonist. A dowdied-up Christian Slater plays Bob Maconel, a balding, bespectacled loser who dreams of shooting up his co-workers. Correct me if I’m wrong, but once upon a time Slater was an attractive man; this time around, he’s a wretch with a bad case of rosacea, unappealing in every way.

Therein lies a key difference between He Was a Quiet Man and the works it aspires to be: The others present leads the audience roots for. Who can resist sympathizing with the lovable, if low-key, Peter in Office Space? And there’s a reason that women go ga-ga over John Krasinski’s Jim Halpert. No matter how hapless they are as worker bees, they’re appealing and interesting.

But Bob Maconel could best be compared to the pathetic, stapler-obsessed Milton from Office Space, only without the humor value and pathos. And when he’s thrust into extraordinary circumstances - someone beats him to opening fire on his officemates - the audience takes no joy in seeing his rise, nor pity in his inevitable fall.

Bob becomes an unlikely hero when he guns down the shooter, Coleman (David Wells), with the very revolver he’d intended for his own massacre. His motivation is saving co-worker Vanessa Parks (Elisha Cuthbert with a bad dye job), whom the gunman has mistaken for a more dour colleague. With Bob’s help, Vanessa manages to survive, albeit as a quadriplegic.

A relationship with Vanessa ends up being Bob’s catalyst. He’s lauded by his townsfolk as a hero for taking down Coleman, and finds himself promoted at work. But here’s the catch: Vanessa’s furious that Bob has saved her life.

Frankly, that kind of dialogue, especially coming from the wooden Cuthbert, hardly evokes compassion. She’s a questionable casting choice, especially when you look at her past body of work. “House of Wax” and “Captivity” were hardly preparation enough for this role. Instead, her Vanessa comes across as a self-centered masochist. Devastated by paralysis, she plans to commit suicide.

“I’m going out the same way I came in - dramatically,” she says with an unsettling grin.

Paired with such a bratty disposition, Cuthbert proves she’s stuck in the teen movie acting method.

The two leads present a strange dichotomy. There’s Slater, who’s changed so much from his glory days and is well past his prime, and then there’s Cuthbert, who’s so static as an actress that she can’t maneuver into any roles of worth. Add the harebrained device of a CGI goldfish to voice Bob’s inner madness, and you really have to start questioning Cappello.

The verdict? He Was a Quiet Man is an ill-conceived, joyless movie that leaves viewers scratching their heads, with a bad taste in their mouth.

He Was a Quiet Man