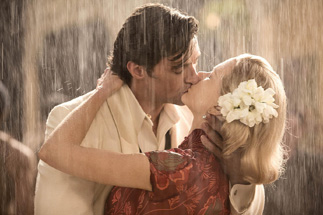 NEW YORK - “Australia” is director Baz Luhrmann’s first film since he dazzled audiences with “Moulin Rouge!” seven years ago, and critics are wondering if the $130 million drama can live up to its hype.

Early reviews are mixed but generally warm for the movie, which makes its U.S. premiere on Monday, and while some critics say it might be an Oscar contender, a best director Academy Award could prove tough - not that Luhrmann seems concerned.

“In a world where there’s a lot of fear, I hope you can come out of the cinema after a few hours and feel like its been an enriching experience,” he said, referring to the global financial crisis. “If you get a little bit of that and you have been entertained, then that is enough for me.”

Starring Nicole Kidman and Hugh Jackman, Australia is the fourth film from Luhrmann, who co-wrote and directed the two-hour, 40-minute epic that is the most expensive film ever made in his homeland Australia.

It tells the tale of an English aristocrat, played by Kidman, who inherits a sprawling Outback property, falls in love with a rugged drover, or cowboy, played by Jackman, and fights to adopt Nullah, a mixed-race boy.

They join forces to drive 1,500 head of cattle hundreds of miles across a stunning but brutal landscape in a bid to save her property and find themselves caught in the Japanese wartime bombing of Australia’s tropical northern city of Darwin.

“I would be very surprised if he even got a nomination [for the best director Academy Award],” New York Post chief film critic Lou Lumenick told Reuters. “The early critical reception is very mixed, and I think the movie will be a tough sell in the U.S.”

But the 20th Century Fox film is generating Oscar buzz in the best picture and best original screenplay categories.

On the Los Angeles Times’ “The Envelope” buzzmeter, which ranks Academy Award chances according to the Times and other critics, Australia is currently seen fifth in the running for a best picture Oscar and third for best original screenplay.

The Movie City News’ “Gurus o’ Gold,” another ranking of Oscar chances by a variety of critics, put Australia eighth in the running for best picture as of Nov. 19.

Luhrmann burst onto the global stage in 1992 with “Strictly Ballroom,” followed by “Romeo + Juliet” (1996) and Moulin Rouge! which combined have earned $390 million worldwide.

Luhrmann spent four years working on Australia and said the scale of it had made it a struggle every day.