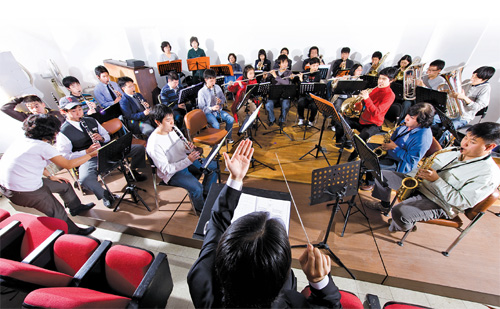 The conductor gets on the podium and the orchestra begins to play. Suddenly, one of the members runs off the stage, shouting “Mom!” and waving his clarinet in the air.

The boy’s mother instantly realizes what the problem is, as would any clarinetist. The boy musician needs a fresh reed, the valve that controls air flow into the instrument. The mom digs out a spare one and hands it to her son who quickly inserts it and takes his place back on the stage.

Incredibly, amid all this kerfuffle, the orchestra continues playing.

This was a scene from a concert in Chicago this September given by Heart-Heart Wind Orchestra, an ensemble of young Koreans with developmental disabilities.

There are 21 musicians in their early teens to late 20s, each one with a passion for music, their chief means of expressing themselves and communicating with the rest of the world. One member didn’t speak a word until he was in his 20s. But by learning the flute, trumpet, clarinet and other wind and brass musical instruments, the young players have found common ground.

“At the beginning, sitting them down was the hardest thing,” said Park Sung-ho, the conductor of the orchestra. A graduate of the Music College at Hangyang University, Park is a senior member of the Gangnam Symphony Orchestra.

He said the musicians under his baton were almost uncontrollable at first and the rehearsals were often a debacle.

But Park persisted and since its launch in 2006, the “uncontrollable” orchestra has become a highly sought-after group.

That year, it held its First Annual Concert, plus three more.

Last year, it gave 15 performances at hospitals, welfare facilities and other venues. This fall, it toured the United States, performing at seven different venues in Illinois and California.

Elmhurst, a suburb of Chicago, which was one of the venues, designated Sept. 28, the day the orchestra played there, as Heart-Heart Wind Orchestra Day.

Since its first U.S. tour, the orchestra has hardly taken a breather. On Oct. 23, the orchestra held its “Happy Concert” at Seongnam Arts Center, Gyeonggi. Just this Thursday, it held its Third Annual Concert at Jangcheon Arts Hall in Sinsa-dong, southern Seoul.

When the orchestra performs, 21 different sounds fill the stage and the auditorium, but watching the young musicians work their way through a score, it’s safe to say the players are working as one, creating a unique and vibrant sound.

The musicians’ mothers take up their stories: 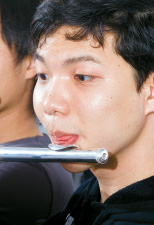 “Young-soo is now a music student.”

My son Young-soo, 25, is principal flautist with Heart-Heart Wind Orchestra. He sits in the first row on the stage, right next to the conductor. Young-soo loves people. He runs up to strangers and asks for their names. He remembers them for a long time. But Young-soo keeps repeating what they said, often hundreds of times, sometimes thousands. Sometimes I can hardly talk with him. I can only use short phrases, but his learning disability is mild.

I have one more son like Young-soo: Seong-soo, 31, Young-soo’s older brother. I gave birth to my first son when I was 33. I was as happy as any other new mom. At first I thought Seong-soo was just a stubborn child. But soon I realized he was different. He threw his clothes out of the window, broke glasses and smashed everything he could get his hands on. Doctors told me he would have learning problems as he developed.

When I found out that Young-soo also had developmental problems, I didn’t feel it was such a problem, even though my husband had left us. It was in 2002 that I bought Young-soo his flute. I’d sent Seong-soo to a center where he could get more specialized care - his condition had gotten really bad. At the time I barely made a living papering people’s rooms, but I spent 450,000 won ($300) on my son’s first musical instrument.

Everyone said Young-soo wouldn’t make it into a music college, let along become a musician. But he hung on to his flute all the time. He practiced for hours and hours. And this spring, he got accepted to Baekseok Arts College.

I can’t be sure, though, how much longer Young-soo can continue to play the flute. He finds some of the techniques too hard to master and he needs my help writing reports.

But I am so proud of my son and he loves his flute.

People often express sympathy for me, a mother with two mentally challenged sons. I tell them, “Having these kids is the greatest thing I’ve done in my life.” 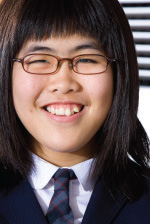 “Ah-rum talks through her trumpet.”

My daughter Ah-rum, 15, plays the trumpet. She joined the orchestra just last November. She’s the rookie. Ah-rum is autistic and she is trapped in her own world. She blurts out swear words she hears at school and she sings to strangers. It’s impossible to talk with her.

She loses her temper so easily and she doesn’t have many friends.

Ah-rum got lost last winter. I found her in front of Samsung Medical Center. She kept saying that she needed to find Ye-rum, her twin sister, who died in 2004.

When my twin girls were about three months old, my husband began a business in an isolated suburb of Gangwon Province. So we moved there. There were few neighbors in the area. I kept my girls at home most of the time, teaching them the alphabet and basic math. When they were 5, I realized something wrong with them. They didn’t respond to my questions. They cried and ran when they saw strangers. They just couldn’t interact with others.

I beat myself up with guilt, thinking that it was me who had failed to teach them the right social skills.

Fortunately, Ye-rum got better as the years went by. She could even attend a regular kindergarten, but she got malignant lymphoma and passed away.

Ah-rum didn’t improve at all. She still didn’t respond much and kept worrying us with her erratic behavior.

Then one day I got a call from the local district office to say Ah-rum was qualified to apply for a funded musical education program. I chose the trumpet for her.

As she learned the instrument, it was as if Ah-rum could converse through her trumpet. She seemed to like the sounds and she enjoyed using her breath and her fingers.

Ah-rum may not be the best player in the orchestra - you should be able to spot her because she sometimes refuses to sit down when the rest of the orchestra does so. And she occasionally stands up in the middle of a performance. But for me, it’s a miracle how my little girl, who wouldn’t even scream out loud if she pricked her finger, is playing with others in an orchestra. In a way, I think Ah-rum is living not just for herself but also for her sister, as well.

“Sung-ho becomes a different person when he plays his clarinet.”

My son, Sung-ho, 24, plays the clarinet in the orchestra. He always wears white gloves, as he keeps picking at his skin with his fingernails. The only time I let him take off the gloves is when he plays his clarinet. He’s stubborn. He often talks like a robot but he’s crazy about books. On our trip to the U.S., he kept running up to people carrying books. I had a hard time controlling him.

When Sung-ho was 15 months old, he began to lose words. When he was 20 months old, he didn’t speak at all. I could hardly ever make eye contact with him. He was less sociable than a 5-year-old. 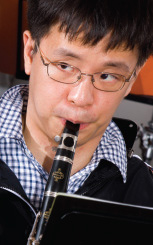 Sung-ho showed exceptional musical talent, though. He started learning the piano when he was 7 and he kept up with other people in his age group. So I gave him the opportunity to learn the clarinet as well.

He now talks with me, although in short phrases. I help him by saying “Today ...” and Sung-ho continues, saying “Today I will play the clarinet.” I say “Bizet” and he will say “Bizet’s ‘Carmen Fantasy.’”

Sung-ho’s younger brother, Geon-gi, asks me, “Are you going to keep looking after him until he dies?” He knows how I spend so much time with Sung-ho, as he can’t wash his hair or get on the subway on his own. Geon-gi grumbles about how I spend most of my income and energy on Sung-ho. After all, the more that goes to his older brother, the less Geon-gi gets.

Even so, I can’t help but feel sorry for Sung-ho. When I was pregnant, my father died. I wept so much. I think that is why Sung-ho was born like this. And after I divorced my husband 10 years ago, my sons became my world, as I raised them by myself. I don’t know what will happen to Sung-ho after I die. I looked for some facilities, not wanting to burden Geon-gi. My No. 1 goal these days is saving money for such a facility.

Who would understand this child other than me? Music is the only gift I can give Sung-ho, but one day he will be on his own.