Hongik U. rocked by admissions scandal

Hongik U. rocked by admissions scandal 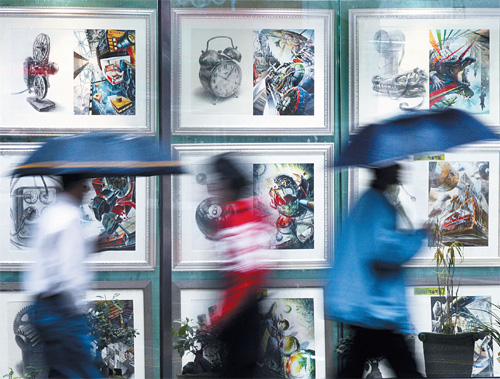 High school students display their work at an art cram school near Hongik University, which is known for its visual art department. Candidates often spend up to three years preparing for entrance exams to art school. By Kim Hyun-dong

Located in one of the more bohemian quarters in Seoul, this arty alley, packed with underground music clubs and tasteful cafes, defines the free spirit of the young people who frequent this edgier neighborhood.

It also conveys the prestige of a university widely recognized as the country’s best for studying art.

For decades, students and professors at Hongik University, better known as Hongdae, have set the standard for the country’s modern art education.

It’s one of the few schools in the country where the president is not only an alumnus but also a graduate of the college of fine arts. This is a rare feat since most university heads tend to come from more traditionally academic disciplines.

In addition, studio classes are led by high-profile artists who claim their approach is more creative than orthodox art schools here that tend to elevate technique over content.

But recent allegations of corruption in the college of fine arts at the university have clashed with the overall image of the area typified by Picasso Street.

Earlier this week, Kim Seung-yeon, a professor in the college, accused seven colleagues in the college where Kim has worked for nearly two decades of favoring certain students during the school’s admission procedures last year.

This is not the first time faculty in the college have transgressed the ethics that under-score the admissions process, “I have seen this happening over and over again for the past 17 years,” said Kim, who teaches in the department of printmaking. “It’s about time we put an end to it.”

The charges that the professor has leveled at his colleagues are all the more shocking because parents who want their kids to get into art school typically
fork over huge amounts of money in tuition fees for cram schools. 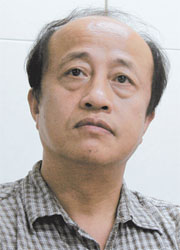 Candidates who want to study art in Korea often spend up to three years preparing for the mandatory drawing or sculpting tests used in the admissions process.
Moms and dads typically face bills totalling about 500,000 won ($340) per month, so news that the admissions process has been subverted by faculty will not be welcomed.

In a country where art is often considered a status symbol, the news has also been a painful reminder for many working-class parents that affluence and
connection are indeed key conditions to getting their children into the nation’s top art schools.

Rumors of corruption and bribery have circulated the corridors of university art and music departments for years.

Some professors in the past were caught putting pressure on colleagues to select students who were the children of politicians or wealthy families.

The situation became so severe in the 1990s that most music and art schools were forced to ensure that at least one-third of the admissions panel came from outside of their own faculty to maintain transparency and try to eliminate the chances of skulduggery. 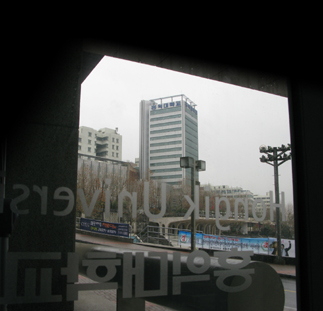 A view of Hongik University from the main gate. By Yoo Young-rae

Critics say the problem lies with the bureaucracy and admission system that art schools use, a system they say fails to nurture students’ creativity.

To prepare for the admissions exam, which can vary depending on the university, students typically learn how to draw from plaster statues of figures from Greek and Roman civilization, such as Venus or the philosopher Agrippa, and sculpt portraitures with clay. This kind of classical training was embraced by 18th-century art academies in Europe.

At private cram schools, art teachers give specific instructions to students on how to paint or sculpt and offer style tips that universities prefer.

There are hundreds of these art cram schools throughout the country. The ones that have been most successful in sending students to the top art schools hoist the names of the admitted students on banners alongside displays of student work samples on easels in front of the schools.

During the art admissions exams, which are held every January, universities divide candidates into small groups and give them half a day to finish their assessed task. Even if the students are outstanding artists, a slight smudge or a faulty brushstroke could wipe out years of hard work.

“You might think college art exams are subjective, but they’re not,” says Jeon Seung-bo, director of the Busan Biennale. “They’re very mechanical. You have a set formula to produce a piece wanted by the schools, and if you follow the rules faithfully, you get better scores. The method is not so different from selecting engineering students.”

Critics have repeatedly raised the problems that they say are inherent within the admission system for art schools, but there is still strong enough support in faculties for maintaining the present system. Some professors claim no better alternative exists for narrowing down students from such vast numbers of applicants. They say the current system is realistic, if not inevitable.

A few art schools here, such as Korea National University of Arts, have adopted the portfolio and interview admissions process popular with art schools in North America and Europe.

But KNUA’s professors admit that some students who enter for the school are not familiar with this kind of application process and that they find it hard to break old habits.

In addition to a review of the students’ portfolio, the Korea National University of Arts currently holds a “creativity test.” All students have to spontaneously produce a piece of work based on a theme given by the school on the day of the exam.

But the school’s art instructors have spotted cases in the past where students have submitted artwork based on random imageries that they carefully studied at home prior to the exam.
“
We created our system to free students from preconceived notions of art,” says Kim Ji-won, a professor at the Korea National University of Arts. “Yet they still can’t get rid of their habit of memorizing and practicing an idea. To be honest, there is no real way for us to tell who is faking their work or not. For that, we can only rely on the integrity of the individual. In the end, that’s the basic condition for anyone who wants to work in a creative field.”

Others are not surprised by students taking advantage of the more innovative admissions systems run by KNAU.

“You have to understand that most students consider getting into art schools nowadays as a major career opportunity and a way to work in the design field,” said one director of an art cram school in northern Seoul who spoke on condition of anonymity.

“Very few Korean students are naive enough to apply for art school hoping to become a serious artist, even students who apply for the fine art department.”
Overall, art academics here agree that the ivory tower of Korean art schools has become so detached from the essence of art that art graduates often take years to produce serious work. And many end up going to study abroad in North American schools to earn the credentials and participate in the high-profile shows they feel they need to move their careers forward.

Clearly, there is a disparity between the admissions test and the work that a university student and a professional artist have to produce.

“The gap is too big between the work I want to create and the work I do now to prepare for the exam,” says Shin Jeong-eun, 20, who failed the entrance exam for the university of her choice last year and is retaking the exam in January.

“At the moment, I just tell myself that this will prepare me to create better work when I finally go to college,” Shin said.

But artists in the field doubt that creative thinking happens overnight. They say the current art education in Korea is a major cultural disadvantage for aspiring artists. It actually represses rather than nurtures it, they say.

“You have to question who controls this system,” says Debbie Han, a Korean-American artist based in Seoul. “It creates a huge dilemma for students because they have to prepare mechanically for these tests but then they are suddenly expected to produce interesting and creative art at college. This means they have to make an enormous effort very quickly to find their voice as an artist.”

Meanwhile, Hongik has confirmed through their internal investigation that one of the accused in the allegations raised by Kim, the professor of printmaking at the university, did breach professional standards. The university said he showed his son’s paintings to an admissions panel on the morning of an art admissions exam. The son was trying for a place at Hongik.

The university has also confirmed that another named professor asked faculty members to pay special attention to certain students during the admission interviews.

One professor was suspended for two months and the other had his salary reduced.

In a press release, the university said it hasn’t found any evidence against five other professors named in the allegation. The school has not yet announced if it will hand the case over to the police.

A music professor at Ewha Womans University who spoke on condition of anonymity said Hongik needs to clarify the case through a police investigation if it wants to maintain its standards.

“Trust is crucial to universities,” he said. “The more credibility they build, the more responsible they become and the better the quality of the graduates.”