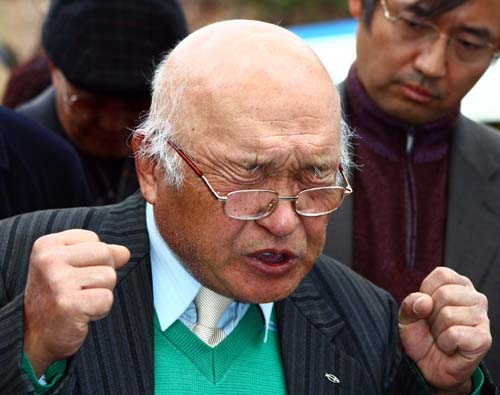 Jeong Won-seop recalls torture he says a police detective used on him during an investigation into the murder of a girl in 1972. A court acquitted him yesterday. [YONHAP]

CHUNCHEON, Gangwon - A 73-year old man who spent 15 years in prison for murdering the daughter of a police officer was cleared yesterday of the charge.

After a retrial, the Chuncheon District Court acquitted Jeong Won-seop, who was 34 at the time of the initial trial, of strangling an elementary school girl after raping her in 1972. The same court sentenced Jeong to life imprisonment in 1973 at the original trial.

Judge Chung Seong-tae said in a ruling; “There were serious flaws in the investigation procedure, such as unlawful harsh treatment against Jeong. The evidence the police and the prosecutors presented is not sufficient to uphold the charge.”

On Sept. 27, 1972, a 9-year-old girl, the daughter of a chief of a police station, was found dead on a rice paddy in Chuncheon, Gangwon, after she walked out of her home to visit a comic book shop. Police arrested Jeong, who ran the comic book shop, and later announced that he confessed. Despite the confession, Jeong denied the charge during his trial. His appeals were rejected by higher courts. He ended up serving 15 years in prison before he was paroled in December 1987.

Jeong filed a petition to Seoul High Court for a retrial on November 1999 to plead not guilty. That petition was rejected in October 2001. He filed another petition to the Truth and Reconciliation Commission of Korea in 2005 and in December last year the commission declared the case was a human rights violation by extorting false confession through torture. That led to the retrial. “It is not only a victory for me, but also a victory for Korean democracy, Jeong said after hearing the ruling. “I will file a lawsuit to get compensation from the state.” After he was released from a prison, Jeong became a Christian minister in Namwon, North Jeolla. He said, “I will come back to Chuncheon someday and want to be buried here.”