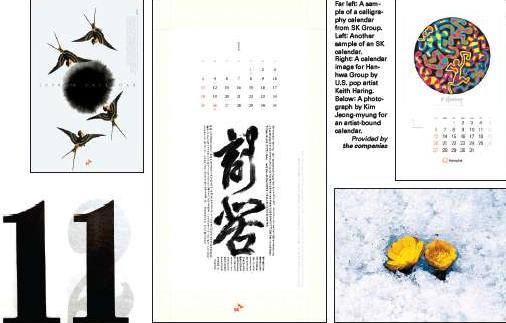 Far left: A sample of a calligraphy calendar from SK Group.Left: Another sample of an SK calendar.Right: A calendar image for Hanhwa Group by U.S. pop artist Keith Haring. Below: A photograph by Kim Jeong-myung for an artist-bound calendar.Provided by the companies

One way of telling a person’s age and background is to get them talking about calendars.

If they were born in Korea during the 1960s, they’ll probably remember bold numbers filling the page of a thin calendar paper.

If they get nostalgic over girls in bikinis in calendars produced by liquor companies here, they probably enjoy drinking. 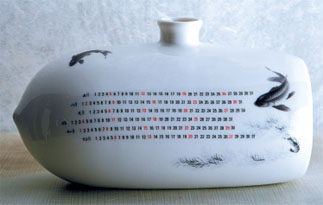 A ceramic calendar by a local manufacturer. By Shin In-seop

Shinsegae, a local department store, is known for producing fancy calendars for clients. For the upcoming year, the company has selected the work of Jean Dubuffet (1901-85). The works included in the calendar are paintings that aren’t even featured in the artist’s current exhibition at the Museum of Contemporary Art in Deoksu Palace, central Seoul.

Since 1993, Shinsegae has printed its own calendars. Its first edition featured the work of the artist Kwon Ok-yeon.

After a warm response, the company started producing special editions for VIPs.

Using high-quality materials, these exclusive editions featured the work of artists such as Magritte, Matisse, Klimt and Roy Lichtenstein. Word spread fast, and there are now collectors avidly hunting down the company’s calendars.

The fad for VIP calendars was triggered by Samsung Group. Its first edition calendar, which presented the work of Matisse, was printed in 1996 for the company’s high-ranking executives, associates and VIPs as a year-end gift.

The Samsung calendar is known for using images of high-profile painters like Van Gogh, Chagall and Cheon Kyung-ja. For 2009, the company has selected work by Ellsworth Kelly, a contemporary painter from the U.S.

The company’s edition of Korean folk paintings last year won a special award at the 59th Calendar Exhibition in Japan. For 2009, SK is using calligraphy images.

Companies often produce two separate calendars for promotion purposes. One is for their general customers, and the other is for VIPs. The difference is that the VIP calendars use special paper that is four or five times more expensive than usual. The print quality for the VIP edition is close to the texture of the original work. They use offset prints, which can handle up to 40 colors per image.

“Cultural standards in Korea have changed, giving rise to a demand for high-quality images for calendars,” says Park Yeong-jun, president of Retail Media Solution, which prints calendars for Shinsegae. “It’s a great way of brand promotion for companies, because it helps shape their image.”

Artists and photographers such as Kim Jeong-myung and illustrator Kim Young-taek produce tailor-made calendars. License fees are paid to artists whose works are used in these calendars.

Many Korean companies prefer to use the work of Western artists. This is partly because there isn’t enough variation in Korean art to convey the changing seasons over a 12-month period.

However, ING Life has been producing a calendar series of emerging Korean artists for the past three years.

The annual calendar market is worth 500 billion won ($339 million), a figure that takes up a significant portion of companies’ budgets every year.

Calendars used to be home-made. The author Ha Yeong-hui describes in a recent novel how a 19th-century aristocrat got fed up with creating calendars for his relatives and students - a calendar used to be a coveted gift for upper class families.

But during the Japanese occupation (1910-1945) mass production for print materials began and calendars were given out for free.

In the 1960s politicians here cranked out promotional calendars for voters.

The tradition continues, and many Koreans still think of calendars as a freebie.