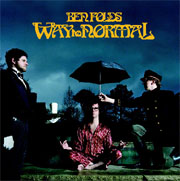 
As an ardent fan of Ben Folds, I can say that “Way to Normal” is a continuation of his creative slump that started with his last album, “Songs for Silverman.”

Way to Normal, both in title and content, reflects Folds’ quest to reconcile his recent emotional troubles. The singer/songwriter just went through an ugly divorce, most evident in “The Bitch Went Nuts.” The tune has some misogynistic undertones, but I have to admit, it’s catchy and I do have several friends who can empathize.

The best tracks are “Cologne” (and its brief piano prelude “Before Cologne”) and “You Don’t Know Me,” a duet with indie princess Regina Spektor. The latter is flawless, but the former suffers from a lyrical and factual miscue in its verse about mad diaper-donning American astronaut Lisa Nowak. Honestly, the reference has no place in a love song.

The rest of the disc borders on the insane. Songs like “Free Coffee,” about the freebies of fame, are shallow and unrepresentative of Folds’ genius. Let’s just hope he finds his way back to normal, pronto.