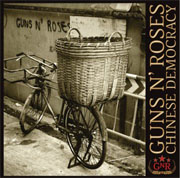 Seventeen years is a long time for any rock band to spend between albums. And for a unit as volatile, controversial and seemingly uncontrollable as Guns N’ Roses, that’s an eternity. Bet you thought GN’R didn’t exist anymore.

But here they are again, with the 14-track “Chinese Democracy,” the band’s first album of original songs since “Use Your Illusion” I and II in 1991 (“The Spaghetti Incident?” from 1993 was a cover album of punk rock classics).

Much has changed with the band over time, not the least of which is its lineup: only the lead singer Axl Rose remains. And for fans of the band’s old days, Rose’s still considerable vocal range would be a delight, especially on the first single, “Shackler’s Revenge,” “Scraped,” and “I.R.S.” Rose even tries to sing on “Better” and “Street of Dreams,” only to mixed results.

Sweeping guitar solos by Ron Thal, Buckethead and Robin Finck give the tracks the requisite hard rock/metal touch. But the album for the most part is too polished for a GN’R album. By Yoo Jee-ho