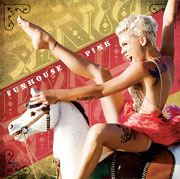 Two years after her last album, we meet Pink at a new juncture in life: recovering from a nasty divorce (is there any other kind?) from the tattooed motocross star Carey Hart, and ready to vent in the form of her latest album “Funhouse.”

Distinguishing herself from her more successful peers like Christina Aguilera and someone named Britney, Pink was always the most likely to win a fight between the girls if not a singing contest. And her divorce album, stage two of the healing process, comes out swinging with typical bravado in “So What,” her first U.S. No. 1 single, by calling her ex-hubby “a tool” and rejoicing “now that we’re done/ I’m having more fun.”

But anticipating more of her upbeat, aggressive pop/rock, Funhouse surprises with a deluge of soft, soul-searching tracks, in which references to “tears” compete for lyric space with marital metaphors of a burnt-down house. Now the funhouse doesn’t seem so fun, befitting Pink’s current emotional state of being as the humorless clown. By Cam Graham