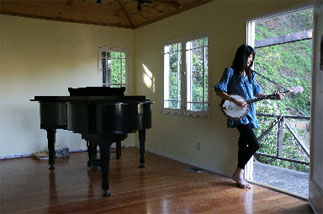 Singer-songwriter Priscilla Ahn will perform in Korea for the first time this week. Provided by the organizer

Kinship means a lot to Koreans, which is one reason they have a hard time accepting kids of mixed ethnicity. But that is also why they are so supportive of anyone with a Korean ethnic connection who succeeds in the international arena, such as Hines Ward, who plays wide receiver for the Pittsburgh Steelers, whose mother is Korean.

Priscilla Ahn may be the next such figure. The 24-year-old singer-songwriter was born to an American father and a Korean mother.

“My dad was in the Army and stationed in Korea. He and a friend of his went to the Korean Folk Village where my mom and her friend were dressed in hanbok [traditional garb] for a special holiday that day. They all met each other there,” Ahn said.

The four had planned to meet again the next week at the folk village, but only Ahn’s mother and father showed up.

“My mom jokes that she was actually hoping the other guy would be there! The two met for a few weeks at a coffee shop, teaching each other Korean and English. They got married in Korea and then moved to the United States.”

Influenced by her father, an avid rock music fan, Ahn learned to play the guitar at the age of 14. After high school, she left her Pennsylvania home for Los Angeles. Working as a waitress, she sang whenever and wherever she could.

Her efforts led her to singer-songwriter Joshua Radin, who introduced her to producer Joey Waronker, who helped Ahn release a self-titled EP in 2006 with two tracks, “Dream” and “I Don’t Think So.”

Soon she signed with Blue Note Records - home to Norah Jones, among others - to release her first studio album, “A Good Day.” Ahn wrote and sang all the songs on the album. “Dream” was used on the soundtracks of “Disturbia” and “Grey’s Anatomy.”

“I’m inspired by life. Things I see, things I hear about, things that happen to me,” Ahn said. “I’m very sensitive and can be a very emotional person, so I have a lot of emotions or thoughts I need to express.”

Ahn plays nine instruments, including the guitar, piano and harmonica, but her favorite is the guitar.

“With the guitar, sometimes it just really hits the spot for me. When I hold the guitar it’s very close to my chest and stomach, and sometimes the chords can sound so warm, and the vibrations from the chords I play are very warm to my heart. There’s something very satisfying about that.”

Next month, Ahn will perform in Korea for the first time. “It will be very intimate. I’m hoping that it will be a successful show so I can keep coming back to Korea to perform,” she said.


Priscilla Ahn will perform at 8:30 p.m. on Thursday at Sangsang Madang Live Hall in Hongdae, Seoul. For reservations, call 1544-1555 or visit ticket.interpark.com.