The heavenly sounds of a trio of priests

The heavenly sounds of a trio of priests 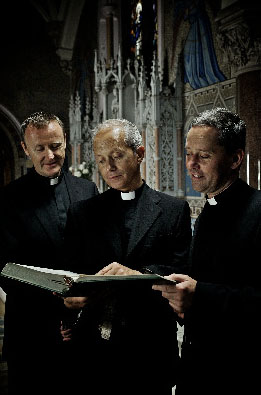 The Priests, a band of three Catholic priests, has released their debut album. Provided by Sony Music

Perhaps more than any other group, The Priests can claim to be driven by divine inspiration.

The three Catholic priests, who have known each other since they were young boys, have released their self-titled debut album to much media hype. With their heavenly harmonies, the three middle-aged Northern Irishmen hope to heal the wounds of the world.

They are Father Eugene O’Hagen, 48, his brother Martin, 45, and their old school friend David Delargy, 44, all of whom are based in the diocese of Down and Connor in Northern Ireland. The three have been singing together since their years at St. MacNissi’s College. With the news of their record deal with Sony BMG’s Epic label, they have become highly sought after in the European Catholic community. They have performed before Pope John Paul II and Pope Benedict.

“We’ve known each other since we were little, and we know each other’s voices well. We have a way of communicating without words. With that, we can make harmony with all our souls,” Martin said in an e-mail interview.

This April, the priests signed their one million pound ($1.5 million) record deal. But before they made their foray into the world of musical stardom, they lay down some ground rules: Their parish duties come before any recording or performing responsibilities, and they made sure they would not be required to do anything that conflicts with their religious beliefs.

“We’ve been priests for 20 years. And we will continue to serve God. There may be difficulties and temptation, but we will find a new love for God everyday. We will stay as priests and serve God, and use music as a tool to serve God,” Martin said. The Priests’ debut album was made with the Philharmonic Academy of Rome under the baton of Maestro Pablo Colino, the Emeritus Director of Music at St. Peter’s Basilica. Recorded in London, Dublin, Prague and Rome, the songs include well-known melodies like Ave Maria, Pie Jesu and O Holy Night. The Priests say with the familiar tunes, they wanted to communicate with the world.

Upon signing the contract, The Priests said they will donate a significant portion of their earnings to various charitable causes. They have yet to decide on the details, though.

“Our music teacher told us that ‘What comes from the heart, goes to the heart,’” Martin said. “We believe in music. Music puts together the small pieces of the soul. ... The world is covered in dark clouds. Music has the power to pierce the clouds.”