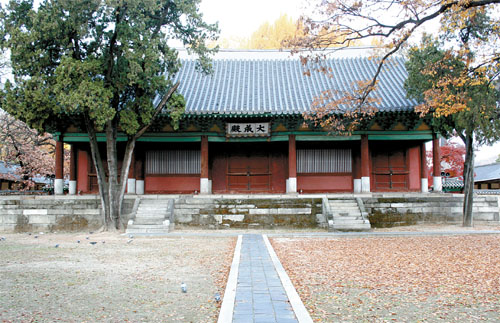 Daeseongjeon, in the Munmyo complex, houses 39 memorial tablets of Confucius and other sages

Munmyo, a Confucian shrine complex in Jongno, central Seoul, is more than 600 years old but even until recently it was very much alive and bustling with people.

Seokjeonje, a ritual service honoring Confucius (551-479 B.C.E.) and other sages, has been held at the complex every spring and fall for hundreds of years and regular classes on Confucian scriptures, rites and etiquettes were also held there. Some selected college students were allowed to live in the complex.

But things changed after Seoul’s landmark 600-year-old gate, Sungnyemun, or Namdaemun, was burned down by arson in February this year.

The Cultural Heritage Administration made Sungkyunkwan, a Confucian academy that ran those programs, remove all the electricity at Munmyo, vacate the premises and close down the educational and dormitory programs that it had operated for decades at the complex. 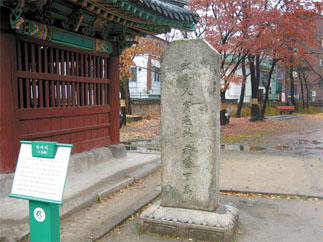 Fortunately, Sungkyunkwan was allowed to continue its biannual ceremony, which is Korea’s Intangible Cultural Asset No. 85, although slight modifications had to be made as incense were prohibited in some buildings due to heightened fire safety concerns.

Located at the entrance of Sungkyunkwan University, the complex is also known as Sungkyunkwan Munmyo or Seoul Munmyo. It was built in 1398 as a national Confucian academy, not long after the foundation of the Joseon Dynasty (1392-1910), which adopted Confucianism as the main state ideology.

Munmyo complex is designated as Korea’s Historic Site No. 143 as a whole and five of its 17 structures are classified collectively as Treasure No. 141. 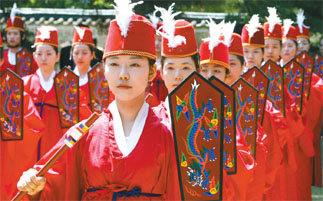 “Munmyo is state property,” said Jo Gyu-hyeong of the Cultural Heritage Administration. “Over the years, Sungkyunkwan had been using the buildings illegally. Until now, we didn’t forcibly drive them out [due to the history of Sungkyunkwan and its classes]. But from early this year, the authorities stepped up its management.”

The Cultural Heritage Administration turned down Sungkyunkwan’s request to reopen the Confucian scriptures, rites and etiquettes classes at the complex. After repeated requests, the authorities gave the go ahead, but with conditions.

For instance, Sungkyunkwan can only use the buildings during the day, as there’s no electricity, and desks and chairs used must be removed at the end of the classes. Most importantly, Sungkyunkwan will have to pay for the privilege of using the buildings.

Sungkyunkwan has yet to accept the conditions and resume the classes.

“Sungkyunkwan used to be a state-run academy during the Joseon Dynasty,” said Choi Yeong-gap, planning director of Sungkyunkwan and professor at Confucian and Oriental Studies at Sungkyunkwan University.

“So its management was financed by the government. In the 20th century, it became private-run. Then, it’s only right that our building come into our hands, too,” Choi said.

While Myeongdong Catholic Cathedral and a part of Jogye Temple are designated as Korea’s cultural properties, they are owned and managed by Catholic and Buddhist communities, respectively. Sungkyunkwan officials argue that they can preserve the cultural property while at the same time make better use of it in today’s society, just as other religious organizations do.

Confucian belief is based on the teachings of Confucius, the Chinese philosopher. [JoongAng Ilbo]

But it looks like Sungkyunkwan has no choice but to pay the fees and follow rules set out by the Cultural Heritage Administration.

“We will reopen the classes at the complex, even if it means paying the fees and having restricted usage. For us, carrying on the traditions and bringing life back to the old buildings is more important,” Choi said.

One may say that the ongoing controversy is no comparison to the major ups and downs Munmyo complex has undergone throughout history.

In 1400, just two years after construction, Munmyo was destroyed by fire, according to historical records, and was rebuilt in 1407. Another misfortune came during Japan’s invasion of Korea in 1592, better known as the Imjin War. As with many houses at the time, Munmyo was burned down, once again. It took years to restore the complex following the devastation that Japan left behind in its wake.

“Confucian temples in Korea all ran a school within its compound to spread Confucian teachings to people,” said Lew Seong-yeul, manager at Sungkyunkwan, during a recent tour of Myeongnyundang, the building used as the main classroom, part of Treasure No. 141.

“Records show there were 150 students of Confucianism studying here the year Sungkyunkwan opened. In its heyday, there were 200 students,” Lew said.

Behind Myeongnyundang is Jongyeonggak, a library built in 1475 and thought to be the first university library. Most of the books were moved to the library at Seoul National University over the years and the rest to Sungkyunkwan University. Jongyeonggak was vacated completely only last year.

Two huge gingko trees stand in the wide, open front yard. They are believed to be about 500 years old and designated as Natural Monument No. 59. The gingko tree is often associated with Confucianism.

On both sides of Myeongnyundang are the rooms where students lived. Called East Residence and West Residence, the two structures have a total of 28 rooms.

A drum at the far end of the East Residence dictated the daily schedule of Confucian students. One beat on the drum was a morning call. Two beats meant it was time for classes to begin. Three beats indicated meal time.

Passing by the sign “Staff Only,” Lew unlocked the wooden doors leading to Daeseongjeon, the major shrine in the complex, also part of Treasure No. 141. Considered the holiest part of the compound, Daeseongjeon is only open on days of traditional ceremonies and special visits approved by Sungkyunkwan officials.

“Daeseongjeon houses 39 memorial tablets of Confucius and other Confucian sages, 18 of which are for Korean scholars,” Lew explained. “The Korean scholars we honor include some of the most revered in Korean history, like Lee Hwang (1501-1570) and Lee Lee (1536-1584).”

Japan’s occupation of Korea took a toll on the status of Sungkyunkwan and the Munmyo complex. The Japanese demoted the state-run academy into a regular academy in 1910 and opened Gyeongseong Imperial University (now Seoul National University) in 1924.

Today, there are thought to be about 100,000 people in Korea who call themselves Confucian followers.

But Sungkyunkwan officials believe the low number is because Koreans don’t usually categorize Confucianism as a religion. Instead, they consider it as a cultural entity and a way of living.

Indeed, Confucianism is a complex system of moral, social, political, philosophical and religious values based on the teachings of Confucius.

“Unlike other religions, there is no ‘God’ in Confucianism. It’s because Confucianism is not about the afterlife but current life,” said Professor Choi. “But for centuries, Confucian philosophies have been deeply rooted in our lives. That is why Confucian values are inseparable from Korean history and traditions.”