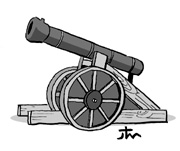 Japan’s Shimonoseki Strait is a 112-meter (367-foot) waterway that separates the islands of Honshu and Kyushu. The port watches about 700 ships go by everyday. On foot, it only takes 10 minutes to cross the waterway through an undersea tunnel.

The peaceful banks, however, are stained with blood. The Bombardment of Shimonoseki refers to a series of bitter military engagements over 1863?1864 between the Shimonoseki-based Choshu clan and joint naval forces from Great Britain, France, the Netherlands and the United States.

The feudal rebels defiantly fired cannonballs from mostly antiquated cannons, but in the end surrendered to incessant retaliatory attacks by the Western forces.

The ceasefire resulted in indemnity of $3 million from the Japanese, confiscation of its weaponry of over 100 copper cannons, and later the basis of further foreign pressure to open Japanese seas to foreign trade.

The Choshu clan became the frontrunner for opening the country after experiencing the physical power of Western civilization through the war by changing its previous position of “kicking out the Western barbarians.”

In 1984, one of the cannons captured by the French at Shimonoseki returned home. A historian discovering the cannons on display at Les Invalides, a war museum in Paris, ran a campaign and the Japanese government fought another diplomatic war with the French to bring the historic relics home.

At last, the French agreed to give back one of the cannons in return for a samurai armor. The cannon, on a two-year lease, now sits in a history museum in Shimonoseki while several life-size replicas are found at the port in remembrance of the hard-fought war.

The story rings a note of pathos for Koreans who share the same history of French invasion and confiscation.

For more than a decade, Koreans have been asking the French to return historical records their troops took during an 1866 invasion of an island in protest of the execution of French missionaries. In last week’s international meeting addressing the return of national treasures in Seoul, a French representative reiterated that Paris cannot return national properties. Thirty volumes of 1,000 books containing the history of the royal family, manuscripts and other Joseon Dynasty court records are on the shelves of France’s national library.

The return of Choshu’s cannons demonstrates that persevering with hard diplomacy can reap results. It’s been 15 years since we brought the matter up with France. We cannot give up now.


The writer is a deputy political news editor of JoongAng Ilbo.