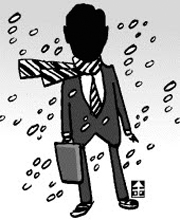 She’s got what it takes. She can speak a foreign language and pilot a plane. She learned cooking from a world-class chef and is a marketing genius. She is an eloquent speaker and even has a license to handle nuclear substances.

She is the pride of temps, who makes regular workers feel small. She works for just three months then leaves the company as they beg her to stay. She then flies off to Spanish resorts for well-earned breaks as she prepares for her next temporary assignment.

She is a fictional figure in “The Pride of the Temp,” a hit Japanese TV series that was very popular when it played here early this year. When Haruko Oomae was laid off from her job at a first-class bank, she capitalized on her experience and education to be successfully reborn as the versatile temp.

The series, however, earned empathy from viewers thanks more to the supporting actors rather than its leading lady. The show vividly describes the reality where timid irregular women workers are often looked down on by regular workers. The series was not popular in the beginning but by the last episode the audience rating had risen above 26 percent. Another factor that helped boost ratings was the fact that former Prime Minister Junichiro Koizumi’s son Kotaro was a leading actor.

In Japan, irregular workers number 17 million, one out of every three workers. Most temps earn low wages and their job security is unstable.

The TV show succeeded in delivering a serious message to society. In Korea, there are more than 8 million temporary workers, 60 percent of all workers, a much higher percentage than in Japan. But most domestic TV dramas focus on love triangles. The issue of irregular workers barely appears in any form of entertainment.

When times are hard, the less privileged are the first to suffer. This week, the Japanese government established an office for emergency employment measures, while the Japanese Ministry of Health, Labor and Welfare doesn’t hesitate to threaten companies that fire irregular workers for no good reason with “severe measures.”

In Korea the issue of youth unemployment is gaining much attention. As for the irregular workers issue, debate is only over the period of employment, which is currently two years.

In the comprehensive measures to manage the economic crisis, released on Nov. 3, the irregular workers issue was relegated to just two lines.

We wonder if the economic reality and the coming harsh winter are pushing people to become temps.