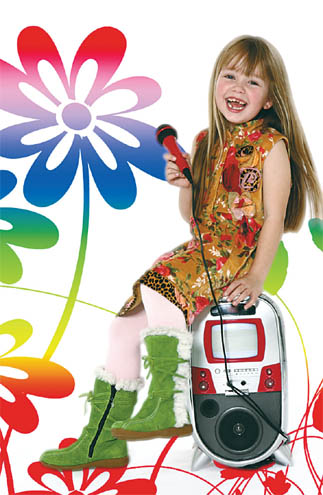 Connie Talbot By the organizer

Connie Talbot, an 8-year-old girl from Walsall, England, became an international star after appearing in the TV talent show “Britain’s Got Talent” last year. She came in second after Paul Potts, the British cellphone salesman turned operatic superstar. Talbot’s angelic face and sweet voice left a lasting impression on people around the world, as videos of her performances were posted on Web sites like YouTube and quickly went viral.

She released her debut album “Over the Rainbow” in November last year, and it went gold in the United Kingdom in three weeks. Her single “Three Little Birds” has climbed to No. 1 in the United States on the Billboard chart. Just last month, the mini singing star released her second studio album, “Connie Talbot’s Christmas Album.”

Talbot will be in Korea next week for her first-ever headlining concert here. The gap-toothed singing sensation will be performing the pop staples from her first album like “Somewhere over the Rainbow” and “I Will Always Love You.” She’ll also be breaking out some Christmas carols from her new album.

Talbot first came to Korea in April this year to promote her album, appearing on the talent show Star King. Her debut album has sold 30,000 copies in Korea.


Connie Talbot will perform at 7 p.m. on Dec. 14 at Ewha Womans University’s Welch-Ryang Auditorium in northern Seoul. Tickets are priced between 33,000 won and 110,000 won. A portion of the earnings will be donated to tuberculosis patients in Korea. For reservations, call 1544-1555 or visit http://ticket.interpark.com. For other inquiries, contact the organizer at (02) 780-5054.