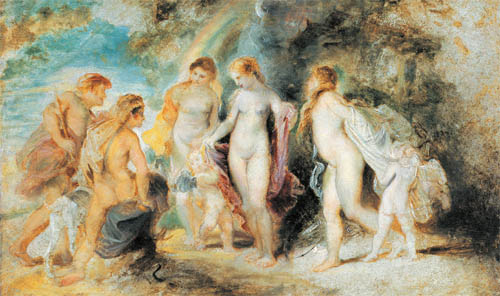 “The Judgment of Paris” (1606) by German Baroque painter Peter Paul Rubens. Provided by the organizer

While most major art exhibitions here today center on impressionist paintings, the upcoming display at the gallery of the Sejong Center for the Performing Arts, central Seoul, takes a fresh approach. It features artworks - mostly by 17th-century painter Peter Paul Rubens - from the Baroque period, an era that fostered the flow of the modern arts.

The collections are from the Vienna Academy Museum in Vienna, Austria, which belongs to The Vienna Academy, one of the renowned traditional art schools in central Europe established in 1692. Adolf Hitler applied to become a painter there but failed twice.

Most of the exhibition’s oil paintings cover themes from Greek mythology.

For example, “The Judgment of Paris” (1606) by Rubens depicts three goddesses - Hera, the queen of the gods; Aphrodite, of love and beauty; and Athena, of wisdom. The painting shows the goddesses competing for the honor of being the most beautiful. Their beauty contest is one of the events leading to the downfall of the Trojan Empire.

“The original masterpieces of the Baroque period are a rarity for Korea,” said Lee Hyung-ok, one of the exhibition’s organizers.

Perhaps Koreans are lucky. The collections were exhibited at the Gwangju Museum of Art in Gwangju, South Jeolla, from last July to November. Some 100,000 visitors went.