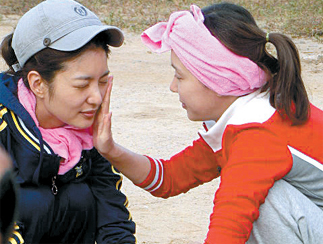 Friends-cum-enemies celebrities washing their faces to reconcile, in the “Best Friends Note” show.[SBS]

As a relatively young entertainment show with only four episodes to date, “Best Friends” aims high to play the role of an angel that fixes the broken hearts of celebrities in relationship crises. Airing Friday nights at 11, the show features two celebrities who bear long-standing grudges against each other and gives them a chance to reconcile

The first to have a go were Lee Ji-hye and Seo Ji-yeong, who were one-time co-members of the pop group Sharp, whose friendship broke down after a dispute that reportedly included a fistfight, verbal abuse and a lot of tears. This fight saw the end of the group’s successful career of almost a decade.

What the show did was to persuade Lee and Seo to meet together on an island with the show’s M.C., Kim Gu-ra, famous for his abusive tongue, and to reconcile. How would the show lead these two sworn enemies to reconcile? Well, there was nothing revolutionary. The list of things they had to do included having Lee and Seo clean each other’s ears (one of the most visually disturbing scenes of the 2008 Korean TV scene), give each other a wake-up call (candidate for one of the most unnatural scenes) and wash each other’s faces in the morning (yet another of the more unpleasant scenes of 2008).

The show did feature some pieces of conversation between the two, but I could not help thinking that the show somehow overplays its attempt to bring forth more dramatic elements from participants. Call me a helpless skeptic, but aren’t these celebrities just acting? Or are they really making peace with each other?

In another segment, the show presents “Best Friends House,” where the featured celebrities, who are strangers to each other, gather at a place to befriend each other. Singing songs like “Who are you?” the celebrities act like they are the best friends of a sort. Friendship is also an object that sells on television.

I don’t think that I am the only one feeling uncomfortable enduring an hour of celebrities singing songs like “Who are you” and cleaning each other’s ears in a setting dressed up to look like, in my opinion anyway, genuine friendship.

Meanwhile, SBS-TV is taking not only friendship but also love as a subject matter in an entertainment show titled “Age of Love.” Airing Thursday nights at 11, the show features two segments. One is a “Love Laboratory,” where the show ponders on a myth about love, such as “Do women really like tough guys?”, which it tests out with real people. For that tough guy hypothesis, the show takes real-world couples of various age groups, and asks men to kiss their partners roughly and suddenly in a parking lot or at a park, with a hidden camera capturing them. As the ladies all turned shy and did not resist, the show jumped to the conclusion that “Yes, women do like tough guys.” The show did not appear to consider it far from scientific verification to say that four couples represent the whole population. The other segment of the show features celebrities on a scrooge date with a budget of less than $5. The voyeuristic indulgence of watching celebrities going pathetic, according to the show’s producers, is a slice of cynicism in a material world.

After sitting through the “Best Friends” and “Age of Love,” I still don’t have an answer to the Bee Gees’ question. One thing is clear, though. Nothing will happen if we shackle ourselves to our TV sets, watching broken-up celebrities cleaning each other’s ears. Turn off the television, go out and make friends or fall in love with a real human being, not this rectangular electric device.