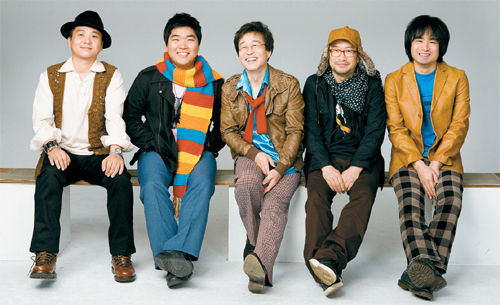 Singer and actor Kim Chang-wan, 54, is currently on top of the world. He released a new album last Tuesday titled “The Happiest” with his new bandmates, following an 11-year hiatus.

The last album featuring Kim was released in 1997 when he sang as member of the group Sanwoolim, which means “mountain echo.”

And now, he has started his musical life anew with his own group - The Kim Chang-wan Band. Other members include Yohei Hasegawa (guitar), Lee Sang-hun (keyboards), Choi Won-sik (bass) and Lee Min-woo (drums).

The album reflects his emotions surrounding this new musical period in his life.

“I always had a thirst for punk music - it challenges the social status quo,” Kim said in an interview last month at his recording studio in Mangwon-dong, western Seoul. He was busy editing the album’s final recordings. This is a first for him in the punk genre.

In fact, Kim, dissatisfied with the music of the time, formed the band Sanwoolim in the mid-1970s with his two brothers, Kim Chang-hun and Kim Chang-ik.

His music is once again making a statement against the commercialism that prevails in the arts industry today.

“The album is an expression of anger toward society, which neglects sound music, and a protest against commercialism,” Kim gave as his reasons for choosing this provocative genre.

“I want to warn the current music industry, which focuses too much on technique and financial interests rather than moving emotions. We [The Kim Chang-wan Band] are dedicated solely to music, not commercialism.”

The band’s melodies are very rough, original and analog, as if going against the digital trend. The instruments tend to clash with each other, and the sounds of members breathing and laughing are melded into the melody.

Included in the six songs on the album are the modern rock piece “Girl Walking” and “Udududada,” a word imitating the sound of the heart pounding. The album also has a song with English lyrics, “The Forklift.” This piece cherishes the memory of Kim’s brother, Kim Chang-ik, who died early this year in Canada in a forklift accident. The melody is sentimental and warm.

But there’s even more to this song.

“Two years ago after the celebration performance of Sanwoolim’s 30th anniversary, I was lost in thought as to what music is to me,” Kim said. Though he had produced 20 new songs, none were released.

After he lost his brother, however, music took on a different meaning. It consoled and comforted him as he struggled with sadness, which is when he wrote “The Forklift.”

He hopes his songs can heal others, too.

With the band’s new album, Kim also re-released all 13 of Sanwoolim’s previous studio albums. Though Sanwoolim no longer exists after his brother’s death, Kim hopes the music still lives on.

“It’s like when Eric Clapton declared on stage that he would no longer sing ‘Tears in Heaven,’” Kim said. “Without my brother, Sanwoolim loses its identity. If it were not for the tragic accident, Sanwoolim would have likely been performing on stage now.”

But perhaps the pain aroused from loss of life has allowed him to look back on his career.

“It wouldn’t be easy finding hints of Sanwoolim in the melodies of The Kim Chang-wan Band,” the artist said. “I’d most like the band to be acknowledged as a new group based on the glory of Sanwoolim.”