[DVD review]Taking another look at paparazzi

[DVD review]Taking another look at paparazzi 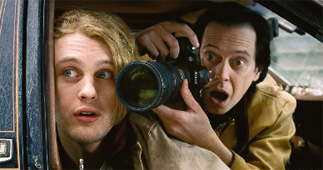 “Delirious” is advertised as “the second Notting Hill,” in which a male Cinderella becomes a prince by falling in love with a famous actress.

But this film is not just another Hollywood romantic comedy. Rather, it’s about a paparazzo who goes back and forth between the showbiz world and a humdrum life.

The paparazzo, Les (Steve Buscemi), trolls at the most splendid events like celebrities’ parties, but returns to his shabby apartment located in what looks like a Chinatown.

Les allows Toby (Michael Pitt), a homeless kid dreaming of being an actor, to stay with him and work as his assistant in return for rent.

Their performances - Buscemi as an eccentric paparazzo and Pitt as someone innocent and simple - are great. It’s one of the reasons Delirious is enjoyable to watch, on top of its well-written script.

Paparazzi are treated as subjects rather than targets here. Director Tom DiCillo mediates the acts of selling fame and buying it. While the paparazzi sneak pictures of celebrities, the celebrities maintain their fame by selling themselves. Both are inseparably related.

Les’ mother asks him when he will get a “real” job. Though he insists all the time that he is a “licensed photographer” and “on the same level as Robert De Niro,” we see that deep inside he feels inferior.

But Les finds comfort in Toby’s friendship. However, when Les takes Toby to yet another celebrity party one night, the young man’s life is turned completely upside down. Les falls in love with a famous singer, K’Harma Leeds (Alison Lohman) and is invited to her private birthday party.

Les, who has never seen the glamorous side of life, loses his head at her party.

Disappointed, Toby leaves Les and moves in with casting director Dana (Gina Gershon). He becomes a star by climbing Dana’s ladder. As we see Toby first use Les and then Dana, we learn no one can be completely innocent in the world of showbiz.

Deserted and lonely again, Les becomes obsessed with Toby. I could understand Les wanting back his friend, who has gone to the other side of the world. But Les doesn’t seem to be jealous of Toby’s success.

Paparazzi are the bottom feeders of the celebrity industry. We see their luxurious but shabby world through Les’ lens.

DiCillo who writes in addition to directing, creates a well-made film. “I wanted to make a film which reflects on our feelings about the celebrity industry, so I chose a paparazzo who is nothing but us,” he said.