Thunder’s humor not for the polite

Thunder’s humor not for the polite 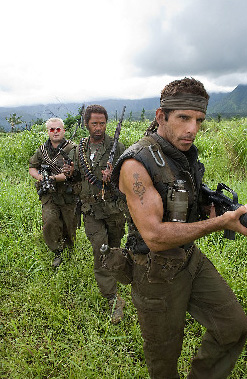 “Tropic Thunder” made headlines upon its release in the United States in August - and not for good reasons. Critics of the latest screwball comedy directed and co-written by Ben Stiller called for a boycott of the film, saying it ridicules the mentally handicapped.

There’s plenty more that’s offensive in the film: Robert Downey, Jr. is a white actor who takes blackface to a whole other level; child soldiers become joke fodder; homophobic sentiments abound. I could go on.

But to those ready to write off Tropic Thunder for those reasons, here’s what I have to say: Quit your whining and laugh already.

The point of this film is that it successfully ridicules just about everyone in Hollywood. The controversial depiction of a mentally challenged person is Simple Jack, a character that Stiller’s character plays in hopes of Oscar glory, and the joke is on actors like Tom Hanks and Sean Penn, not disabled individuals. It’s satire, plain and simple - and hilarious.

In the movie, Tropic Thunder is the name of the latest film project for prima donna actors Tugg Speedman (Stiller), Kirk Lazarus (Downey) and Jeff Portnoy (Jack Black). But just five days into shooting the Vietnam War epic, the stars’ egotist antics have stalled the film by a month. Taking a hint from the war hero who penned the screenplay’s source material, the inexperienced director decides to thrust the actors into the wild and shoot “guerilla-style” to lend the project an air of authenticity.

But when a series of mishaps befalls the crew, surviving Vietnam’s jungles becomes reality to Speedman, Lazarus and Portnoy - whether they realize it or not.

My newsroom colleagues who eagerly await the film’s release here next week anticipate Tropic Thunder to be “Zoolander goes to ’Nam.” Like “Zoolander,” Stiller’s priceless 2001 satire of the male modeling industry, Tropical Thunder relies heavily on absurd visuals, great cameos (pay close attention to film executive Les Grossman’s nose) and some of the same physical gags. Stiller reprises his Derek Zoolander skipping hop as Speedman, and Black hearkens back to Hansel and Derek’s walk-off when he gropes around in his briefs.

I’m still partial to Zoolander, but the subject matter of Tropic Thunder does lend itself to a completely different aspect of moviemaking: gore. Whereas the fluids we saw spilled in Zoolander were orange mocha Frappuccinos, this time there’s lots of blood… and guts… and intestines. But the gruesome, revolting scenes come with a heavy dose of humor as well.

“It’s corn syrup,” Speedman shouts to his co-stars as he holds what he believes to be a prop for a severed human head. “It’s just… warm and blood-flavored,” he continues as he tastes the crimson liquid oozing from the wound.

The scene is stomach-churning, but I found myself squealing from equal parts disgust and amusement.

Tropic Thunder shows that 10 years after making it big in “There’s Something About Mary,” Stiller’s still got it.

Even better, it ushers in a new generation of funnymen with young co-stars Jay Baruchel (previously seen in “Knocked Up”) and Brandon T. Jackson (playing Alpa Chino here).

Despite their far less recognizable names, they outshine Black and Downey with their youthful humor gold - especially in the movie’s last act. Unfortunately, the script really only provides the two veterans with one joke apiece: flatulence for Black and acting black for Downey.

So I say, if you can put down your shield of political correctness and just have fun with the film industry’s follies and foibles, let Tropic Thunder make its movie magic. Just don’t say I didn’t warn you.