Looking for what to do this Christmas?

Looking for what to do this Christmas?

In hard times, Christmas still comes round. But despite predictions this could be one of the slowest holidays yet, travel agents and concert organizers are luring citizens with a wealth of shows and events.

Here are four ways you can celebrate. If the Finnish aurora seems too extravagant, the falling snow made with 400,000 LED lights at Shinsegae, central Seoul might do the trick.

Just like cold weather and the snow greet us every winter, there are certain performances and concerts that pop up every Christmas season. However, with a contracting economy, some may cut back on their entertainment spending.

In a recent survey by Lotte Department Store, 20-somethings still picked watching performances as their No. 1 Christmas plan this year. For them, there is a wide spectrum of genres, prices and venues.

For example, they can go to one of several Christmas classics of “The Nutcracker.”

“Since we first introduced The Nutcracker in 1977, it has been performed every year, except last year when a fire erupted in the Opera House,” said Shin Hyeon-ju from the center. “The Nutcracker has long been one of the most popular performances at Seoul Arts Center.”

Those preferring heavenly sounds can go to Paris Boys Choir Merry Christmas Concert on Dec. 12 at the Sejong Center for the Performing Arts (02-548-4480). Also known as “The Small Singers of the Wooden Cross,” the choir was founded in 1907 and is considered one of the world’s most respected choirs. The following day at Seoul Arts Center, Dresdner Kreuzchor, or the Choir of the Church of the Holy Cross, another prominent world choir, will stage a Christmas Concert (02-599-5743). 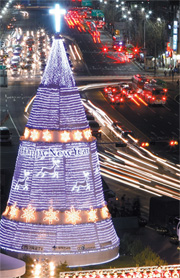 A 21-meter Christmas tree in front of the Seoul City Hall was lit up this Monday. [JoongAng Ilbo]

Every winter, the city of Seoul sparkles with Christmas lights. Public parks, department stores and office buildings pour their creativity and money into lighting up the winter nights and adding to the holiday atmosphere. Expectations were that they would minimize Christmas decorations this year due to economic concerns, but on the contrary, it looks like the city will be putting on more colorful, imaginative decorations than ever, aiming to spread hope and inspire spending among difficult times.

This Monday, a super-sized Christmas tree at the Seoul City Hall Plaza, was lit up. The 21-meter (69-foot) tree will light up every night until Jan. 4.

As part of the winter portion of the Hi Seoul Festival, the Seoul city government said it will further adorn the downtown area from Dec. 19 to Jan. 18 with Christmas lights. Under the theme “White Night,” lights will go up in Seoul City Hall Plaza and along the Cheonggye Stream. Iconic structures like Dongnimmun (Independence Gate), the Sejong Center for the Performing Arts and the Seoul Metropolitan Council will also be a-twinkle, and laser shows are planned for the coming weeks.

The Christmas decorations at the department stores started sparkling early last month. And despite the relative lack of the fluffy white stuff so far this year, the prevalent theme looks to be snow.

The Galleria Department Store in southern Seoul, meanwhile, set up what they call a “Christmas Dress” in the shape of a 14-meter Christmas tree. Created by illustrator Gang Yun-ju and children’s book writer Jeong Eun-mi, the installment allows people to enter it for a closer look. 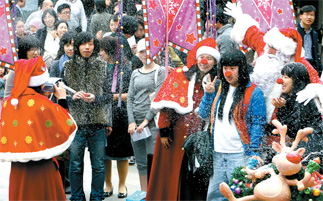 “Chrismas Fantasy at Everland.” Provided by the organizers

With an ailing exchange rate putting a damper on the holiday travel plans of many, those with a vested interest in tourism are offering Christmas travel packages to tempt potential vacationers.

The Singapore Tourism Board (02-3406-2273) is throwing a series of holiday events as part of their “Christmas in the Tropics” event starting Dec. 15. The city-state’s major tourist attractions like Orchard Road will be adorned with lights, and there will a New Year’s countdown, parades and fireworks on Marina Bay, along with a free tour on a Christmas trolley. Major shopping districts will extend their operating hours through Jan. 2.

Korean Air is offering an eight-day “Aurora Tour” to Finland at 4.59 million won. The package includes visits to the Santa Village, igloos and a snow castle as well as a dogsled trip.

Hana Tour has put together a European Christmas package that includes stops at major Christmas markets in Rothenberg, Vienna and Paris. The 12-day, six-country trip starts at 2.8 million won via Asiana Airlines and departs Monday, Thursday and Sunday.

If leaving Korea right now has your wallet quaking in fear, Tour Express (02-2022-6605) is featuring domestic travel packages. A day trip to a winery in Cheongdo, North Gyeongsang, includes a tasting of the region’s special persimmon wines and a visit to Unmun Temple leaving from Gwanghwamun subway station (line No. 5, exit 6) at 7 a.m. Korail operates “snow trains” to Gangwon’s Mount Taebaek and Jeongdongjin. KTX also has a train package to Muju ski resort which includes mountain sightseeing from a gondola, a dogsled trip and a visit to an outdoor hot spring.

Everland (031-320-5000) in Gyeonggi has unveiled this year’s “Christmas Fantasy” festival, and Lotte World (02-411-2000) is throwing a “Happy Christmas Festival,” with a musical featuring a flying Santa and eight bungee-jumping reindeer.


It’s that time of year when local museums and galleries put on blockbuster shows for students on winter break. 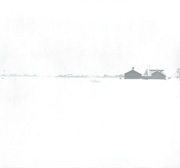 One of the biggies this year is an exhibition of works on loan from Centre Georges Pompidou, the world-renowned Parisian modern art museum, currently on at the Seoul Museum of Art (02-2124-8800) through March 22. Called “Heaven for Artists,” the show is headed up by the Pompidou center’s chief curator, Didier Ottinger. It features a mix of paintings, sculptures and installations by 20th-century masters including Pablo Picasso, Henri Matisse and Marc Chagall.

At Hangaram Museum in Seoul Arts Center (02-2113-3400) a collection from the Pushkin Museum of Fine Arts runs through Feb. 26 and includes works of Peter Paul Rubens and Anthony van Dyck. Rubens (1577-1640) and other Baroque masters are also featured in a separate exhibit at the Sejong Center through March 13.

Other shows include a souvenir display at Gallery Kong (02-738-7776), which brings together the works of five artists. Included are still-life photographs by Victor Schrager and minimalist porcelains by Kim Seon-mi, whose works are used in the Blue House kitchen. Prices range from 100,000 won ($68) to 10 million won. 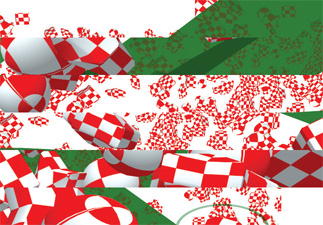 “Joy of the Present” by Han Kye-roon at Art Center Nabi. Provided by the organizers

Opening on Christmas Eve at Gallery Ssamzie (02-736-0900) is “Feel at Home Please,” a sales of artist-made mugs, ceramics and paintings.

“Happy Tree Generator” by Jihoon Byun uses algebraic functions to form different types of Christmas trees every 15 seconds. Han Kye-ryoon has produced a cheerful image of Christmas by juxtaposing patterns of green and red in his “Joy of Present.” “Christmas Flowering Tree” by Joo Myung-song is a virtual image of a flowering Christmas tree.