No easy way out of North Korea

No easy way out of North Korea 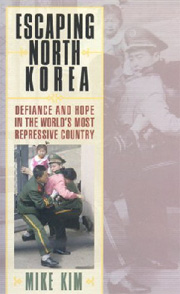 The front cover tells the story. A North Korean woman dressed in a cheap pink jacket is trying to force her way past two burly Chinese security guards. One is grabbing the refugee tightly around the waist and the other is blocking her entrance into the Japanese consulate in Shenyang, China. Just a few feet away stands the woman’s daughter, Kim Han-mi, her hair hastily tied up in pigtails and her face crumbling into fear.

This image taken in 2002 - and broadcast around the world - is one of many that tell of the plight facing North Koreans brave enough to have first of all escaped their homeland and secondly mustered up the courage to break out of hiding in China and try to force their way to safety. But somehow this image lingers. It’s the brutal force the Chinese guards are using to prevent the mother from reaching her child. It’s the fear spreading across the toddler’s face. It’s the innocence of the pink clothes of the escapees against the officious green of the starched military uniforms.

You look at this photo on the cover of Mike Kim’s extraordinary book “Escaping North Korea: Defiance and Hope in the World’s Most Repressive Country” and have to confront an uneasy question: How did we as humans become so savage that we have let this kind of vicious inhumanity persist?

Kim was a fledgling financial whiz kid in Chicago before he made a trip to China that changed his life. So moved was he by the stories he heard in China about refugees in hiding he quit his job and moved to California where he spent a year training to be a missionary specializing in humanitarian aid.

Within just a couple of years he had set up Crossing Borders Ministries, an NGO that provides food, medicine and shelter for North Korean refugees.

Kim wears his faith lightly, a plus in my book, since I am usually suspicious of missionary activity, especially people who fill up the minds of the vulnerable with fairy stories about angels, God and miracles. But Kim is a truly incredible man. Rather than sit on his backside and fill his blog with “commentary” about North Korea issues like so many “commentators,” he goes to the Sino-DPRK border and helps people escape. His account of shepherding four North Korean teenagers into the British Consulate-General in Shanghai is gripping stuff - a matter of life or death for the refugees - and his equally remarkable overland trip through Laos and Thailand would make for a sensational movie.

The most disturbing sections deal with sex trafficking. China’s one-child policy and preference for sons, means there aren’t enough women for its men, making North Korean women vulnerable to traffickers. More than 75 percent of the North Korean women crossing the border into China are subject to trafficking and rape. Their choice: leave North Korea or take a chance in China, and be sold as a wife, or more precisely, a slave. These women are bartered for and sold at the border for just a few dollars, yet slavery and rape is often a better alternative to life in the North.

“North Koreans are in the ultimate position of vulnerability with the only alternative to following a trafficker into China being starvation, suffering and possible death,” Kim tells us.

What would you do given such a dire choice?

Kim is not the greatest writer in the world but he is a first-class reporter. This is a well-researched report packed with first-hand accounts of what people have to do to escape North Korea.

The good news is the mother and child, now 8 years old, forced apart in Shenyang in 2002 were reunited and allowed to leave for South Korea, the Chinese relenting to international pressure after publication of the photo.

But few stories about escaping North Korea end as happily.