Obamanomics shines a light of hope in dark times

Obamanomics shines a light of hope in dark times 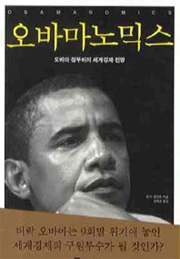 Which developing country is most likely to go bankrupt? Three years ago, one American investment bank began researching third-world nations, trying to answer this question.

However, an employee inadvertently included developed countries in the computer program that was crunching the research numbers, resulting in a surprising result - the answer to the question was the United States itself.

The program showed that the U.S., with its $10 trillion of debt, $350 billion financial deficit, and $700 billion annual trade deficit, was the nation most exposed to potential financial disaster.

This prospect is particularly frightening given today’s climate, in which the U.S. economy is in a tailspin that has sucked in much of the world.

But “Obamanomics, How Bottom-Up Economic Prosperity Will Replace Trickle-Down Economics” predicts that the policies U.S. President-elect Barack Obama will apply after his inauguration will offer the nation some hope. In forming his forecast, the author meticulously picks through the next president’s speeches and election pledges.

But the author also asserts that the United States is a nation with a serious host of problems. For instance, American millionaires flock in droves to the Kentucky Derby on the first Saturday of March every year. There, they pay huge sums of money on a two-minute horse race, while right next to them, there are young workers getting paid $2 an hour and sleeping on a sheaf of straw. The author argues that the nation puts the value of a horse race at millions and millions of dollars, but isn’t providing hope to the young.

One out of eight Americans is suffering from desperate poverty, even to the point where the needs of the children are being neglected. One out of six people in the U.S. cannot register for medical insurance. Talbott claims that the country’s actual unemployment rate is 18 percent if calculated carefully, and the top 1 percent of the population owns 40 percent of the total wealth. He says that inherited positions and connections decide a person’s success more than their individual capability or effort. He says that there is a rule in the United States: If you were born poor, your life is pretty much predetermined.

The author expects Obama to flip this entire unjust system on its head. Obama has stated that the U.S. financial crisis stems from the fraudulent practices of mortgage businesses, hedge funds and banks, and promised to enact measures to weed out such illegal actions. Moreover, he argues that Washington lobbyists and elected representatives who received bribes and refused to pass the necessary regulations are the ones responsible for the crisis.

Obama recognizes, according to Talbott, that the problems of the U.S. largely arise from special interest groups and corporate lobbying.

Obama also said that poor people can’t tell the market what they want because they do not have money, and as such, the market ignores the poor. This situation is the basis of the president-elect’s push for appropriate regulation of the markets. Because of this, Obama is classified as a ‘social market economist’ and ‘order liberalist.’

Talbott says it is highly possible that the U.S. will turn to protectionism or limited globalism, based on a philosophy that trade and globalization provide a better life only to the winners. The author predicts that America under Obama may renegotiate Nafta in order to add regulations on labor and the environment. He points out that if China does not protect the rights of workers and consumers, a reduction in, or even end to trade cannot be ruled out.

But despite the potential protectionism, the book offers some much-needed optimism in these troubling times.