Staying connected in the hinterlands

Staying connected in the hinterlands 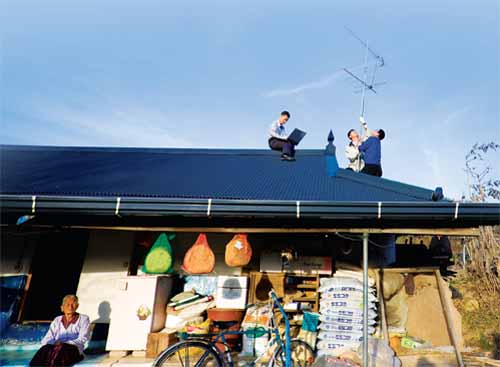 
Today, just as long as the electricity isn’t down, people rarely have to worry about poor television reception. Believe it or not, in the good old days, when it rained outside, it also rained on people’s TV screens.

Often, the father would climb onto the roof to check on the antenna. “It is better now?” he would ask.

“No, move it a bit more. Ah, it was better just before,” children would say. After wrestling with the antenna for a while, the father would come down soaked to the bone.

But for some, who live off the beaten track, such experiences are still part of daily life. There are still those who have to do some rooftop climbing to get a clearer picture on their TV screens. In deep, secluded mountain villages where cable lines aren’t installed, such a simple thing as fair TV reception is considered a luxury.

Serving the needs of such people is a special unit called the Customer Satisfaction Mobile Team. They work with the Central Radio Management Office and have, among other functions, the task of visiting houses to check and fix antennas. Twice a year, the team visits regions where reception is poor. On the day I accompanied the unit the skies were a clear blue.

The destination was Cheongsong County in North Gyeongsang.

“It’s a good thing that the weather is fair today,” said Jeong Guk-jin, one of the members of the team, as he arranged antennas in the car. Jeong is from the Daegu branch office of the Central Radio Management Office. There are 20 such branch offices across the country.

Jeong and others at those offices are the “go-to guys” when it comes to reception troubles. For the following three days, the four-member team would be making their rounds of the secluded houses in the mountainous regions of Cheongsong. 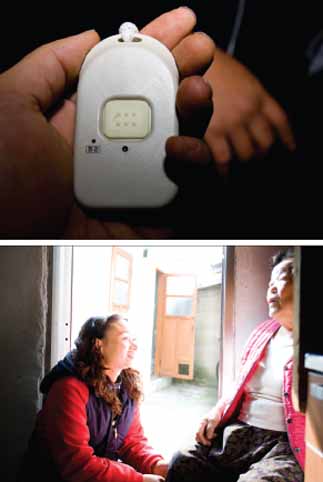 Top and above: The special unit is in charge of checking that elderly residents’ wireless pagers are working properly.

The team has three basic missions: visit houses with poor TV reception and enhance it; check if there is anyone “stealing” reception in the vicinity; test whether elderly residents’ wireless pagers are working properly. These pagers serve as a lifeline in the event of an emergency as they live so far from essential services.

Located within the depths of mountains, Cheongsong is one of the major poor-reception areas in Korea. Also the majority of residents here are over the age of 65, making the job of the special unit that much more difficult and crucial. And so the work begins.


Mission One: Restoring “You Are My Destiny”

The high mountains in Cheongsong are an obstacle not just to humans, but also to radio waves. In the downtown area where a cable line is installed, people can get good TV reception, but most of the mountain villages don’t have such a luxury. Choi Pil-sun, 77, lives in such an area in a small village called Jinbo. She was hulling beans in her front yard when we arrived.

“I get a little MBC, but I haven’t been able to watch KBS for days. It’s killing me,” Choi told us. She lives by herself in a huge house. She sometimes stays at her son’s place in Seoul, but has never warmed to living in an apartment building.

“The antenna is too old. Don’t worry, we’ll replace it with a new one,” one of the team members said. In 10 minutes they had done the job. “This should do. Try turning on the TV,” he said.

Choi went into the living room and turned on the TV. She began beaming immediately. “Ah, I should able to watch Saebyeok [the main character in the KBS drama ‘You Are My Destiny’] from now on. I missed several episodes. I was out of touch in conversations with friends,” Choi said, grinning.

The greater part of Jinbo village, located northwest of Mount Juwang, suffers from poor reception. Our next stop on the way was the residence of Gwon Yeong-cheol, 88, and his wife Kim Jung-su, 89. The couple have been married 70 years. Their small TV screen in the bedroom showed just gray dots and lines. One could barely tell what was on. 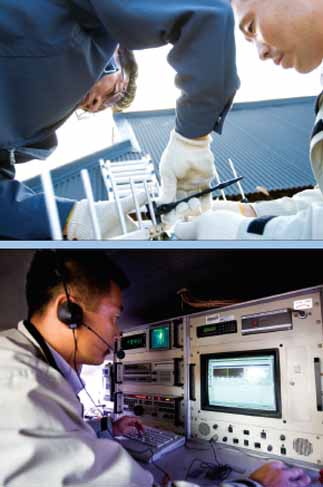 “My son installed the antenna. But something must have gone wrong,” Gwon told us, dressed in his pajamas. The members of the unit climbed onto the roof, with Kim watching closely, perhaps concerned the house might come tumbling down.

The elderly couple leaves the TV on until late at night, watching news, dramas and other programs. “We don’t have much to do here in the country,” they said. The TV screen cleared up nicely as if someone had cleaned it with a sponge.

“I don’t know how to thank you. Please take some jujubes,” Gwon said as he walked us out.

A man in his 30s approached the civil service counter of the Customer Satisfaction Mobile Team set up at the Culture and Sports Center of Jinbo village. The man was one of the “wireless communications operators” nominated by the Central Radio Management Office. Their job is to monitor whether there is any illegal use of radio waves in the area and to catch such “thieves.”

“Radio waves are public property,” said Gang Chun-gap, the leader of the Customer Satisfaction Mobile Team. “That means you must register and get approval to use it. If you don’t, it’s basically stealing.”

That day, there was a report of a possible “theft” near the Cheongsong branch of NH Bank. The mobile team set out in a car with special antennas on the roof for tracking radio wave use.

“We must be getting near,” Jeong Guk-jin said looking at the monitor. Ju Gyeong, another member of the team, got out of the car with a GPS device and further inspected the area. “Here it is,” he shouted.

It was a telephone pole. It showed that there was a radio wave leak in a cable the broadcasting company had installed here.

“Most of the reports lead us to radio wave leaks like this one,” the members explained to me, who was quite disappointed with the actual identity of the “thief.”

“A lot of such illegal use is in fact connected to actual crimes. Once we raided a gambling house using illegal walkie-talkies.”

They also shared some heroic episodes in which they caught people illegally wiretapping others in hotels and offices.

Ten years ago, the Korean authorities distributed wireless pagers to the physically challenged and senior citizens. During an emergency, they can press the button on the pager, which will automatically connect them up to 119, the emergency telephone number in Korea.

First up was the home of Lee Won-su, 87, deep in the mountains in Budong village of Cheongsong. The house is so secluded that Lee has to walk more than 20 minutes just to catch a bus. Not expecting any visitors, Lee was surprised to see us. “We came to check your pager. Remember the 119 pager? Where did you put it?” asked one of members.

Lee got the pager out from deep within a drawer.

“You should keep it on you all the time, in case you collapse and cannot reach for it,” said another member of the team. After he pressed the button, the pager sounded: “The emergency button has been activated. It is now connected to 119.” Then, a voice over the wire phone said, “One-one-nine, is everything O.K.?”

Lee visits the hospital once or twice a month as she suffers from pain in her back and legs. But she hasn’t used the pager service yet, saying she doesn’t want to cause others trouble.

“It’s O.K. to use it when visiting the hospital,” one of the members said warmly to Lee.

The second stop, the home of Kim Ui-seon, was not just isolated, but also tightly locked. Kim, 83, who finds it hard to move around, stays in her room almost the whole day. She’s been living by herself for more about 50 years. On the wall she has hung a picture of herself when she was young.

As she listened to the members explain how the pager worked, she looked puzzled.

“You were so pretty when you were young,” Jeong said to Kim. Kim smiled shyly.

The pager was working properly and our job was done. But leaving wasn’t that easy. Kim left the door open and watched for a long time as we left.