A total of 297 uigwe, the ancient documents that dictate the protocols of royal ceremonies and rites of the Joseon Dynasty, are currently kept at the National Library of France. French troops took them from Korea in an 1866 invasion. Provided by National Memory Heritage Service, Cultural Heritage Administration


On Jan. 28, 2002, a five-member Korean delegation boarded a plane for France. Feelings, however, were a mixture of excitement and apprehension, considering they were about to engage in an encounter of their lives.
The delegation, including historians Kim Mun-sik, Shin Byung-ju and Lee Jong-muk, was to visit the National Library of France to examine ancient royal documents from the Joseon Dynasty (1392-1910).

It was 136 years since French troops had taken the precious palace records from Korean soil during Byeongin-yango, the French invasion of Korea in 1866, and 27 years since Park Byeong-seo, a Korean working at the French library, unearthed them, finding they had somehow survived the test of time and transportation.

The texts - 297 volumes in all - turned out to be uigwe, loosely translated as “model protocols.” Uigwe form a comprehensive and systematic collection of writings and paintings that provides a detailed account of the important ceremonies and rites of the Joseon Dynasty. Historians attach great importance to uigwe, which are unique to Korean history, and only occured in the latter part of the Joseon era.

“Obviously the mood wasn’t very good, as the negotiations on the return of those documents had not gone well,” reminisced Kim Mun-sik, now a history professor at Dankook University. He was then with the Kyujanggak Institute for Korean Studies at Seoul National University.

Since 1991, the Korean government had been asking France to return the royal texts, with little progress being made as the books had become France’s national property.

In 1993, at the Korea-France summit in Seoul, French President Francois Mitterand returned to Korean President Kim Young-sam one of the 297 books and promised to return the complete collection in coming years. This was part of a bid to export France’s high-speed train TGV to Korea. The export of TGV materialized, but the promise to return the documents remains unfulfilled.

Talks on France permanently “loaning” the books to Korea in exchange for other ancient Korean documents have also transpired. But the deal didn’t satisfy the Korean public who would have to sacrifice their cultural properties for what they see as stolen Korean heritage.

“Officials at the National Library of France were pretty defensive in dealing with us at that time. They kept a close watch on our every move. As fortunate as we were as historians for the opportunity, our work was not easy,” Kim reminisced in a phone interview with JoongAng Daily. 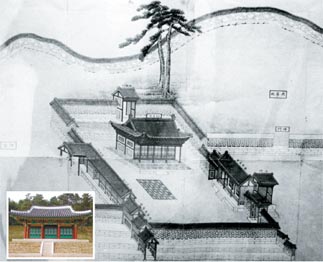 King Jeongjo, the 22nd king of Joseon, built Oegyujanggak on Ganghwa Island, as an annex of Gyujanggak, the Royal Library. Valuable heirlooms were kept there, including the royal protocol texts taken by the French troops. The building was destroyed in the French invasion but has been restored, as seen in inset. [JoongAng Ilbo], provided by Ganghwa

The Korean historians were allowed to check out only one book at a time. They worked nonstop from opening to closing hours of the library, but with their itinerary limited to five days, they only managed to examine 100 of the 297 books.

They had to fly back to the French library six months later for the second round of their on-site inspection. This time they were able to finish their examination, but “Korea’s job,” which is to restore the precious texts, seemed to have a long way to go.

“The books’ covers and bindings had been completely changed. Only 12 of the 297 books had their original silk covers. It was very disappointing,” recollected Shin Byung-ju, history professor at Konkuk University.

“When the French army came to Oegyujanggak (an annex of Gyujanggak, the Royal Library) on Ganghwa Island where these palace records were kept, they burned most of the books as well as the building itself, except for the uigwe. It was because even foreigners recognized the value of these documents, with their silk covers, elegant binding, quality paper and sumptuous and sophisticated illustrations.”

Above left: French President Francois Mitterand returning to Korean President Kim Young-sam one of the 297 volumes during their 1993 summit in Seoul. Right: Korean historians reiterated the need for the return of Oegyujanggak documents at the ICPRCP meeting in Seoul. [JoongAng Ilbo]

Uigwe were made in two types: one for the king’s eyes only and the other for general purposes. Obviously, the ones for the king had the most artistic and documentary value, using highly-quality silk covers, binding materials, among others. They were kept at Oegyujanggak, which was considered safer than the Royal Library at the capital. Thus, the books the French had were the uigwe made for the king, one of Korea’s most precious documentary legacies.

The Korean historians found that 30 of the 297 uigwe at the National Library of France were the only copies in the world. Korea had managed to keep most of the copies for general purposes despite invasions by imperialist forces, but not all.

And to their further dismay, the historians found banchado, the elaborate pictorial materials that depict the rituals and ceremonies of the time, had the French library seal stamped on them. 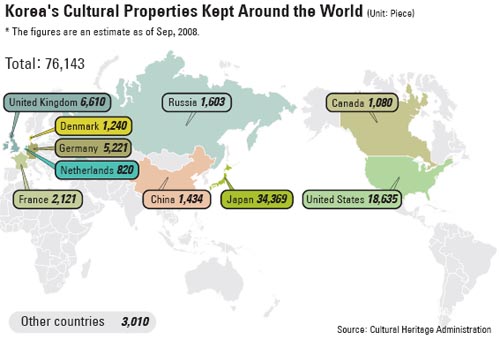 Six years have passed since the historic on-site inspection, but Korea’s royal documents still remain in France. And Korean historians are still fighting the same battle.

“Uigwe are national records, different from items appreciated for their beauty like images of the Buddha and works of art. They are essential for conducting research on the history and culture of Korea, especially on royal ceremonies and rituals,” said Professor Shin at a recent Unesco committee meeting in Seoul. “There is a considerable difference between what uigwe mean to Korea and what they mean to other countries. What significance would the national records of one nation have to another?”

Shin was speaking at last week’s meeting of the Intergovernmental Committee for Promoting the Return of Cultural Property to its Countries of Origin or its Restitution in case of Illicit Appropriation, ICPRCP, which was celebrating its 30th anniversary.

Thierry Berthelot, counselor of the French Embassy here, said at the meeting that France is dedicated to negotiations with Korea on the return of the documents, but the process is difficult as the documents are France’s national property and French law prohibits the outside transfer of national properties.

Berthelot also noted how there has been some progress such as digitalization of some of the books. In celebration of the 120th anniversary of Korea-France diplomatic relations, the countries agreed on the digitalization of the 30 single-copy uigwe in 2006. The project, which took off in May 2007, was completed in March this year. And since June this year, Koreans can now view the contents online through the state-run National Memory Heritage Service (www.memorykorea.go.kr).

Shin refuted France’s “national property” claim with a 2006 case in which Japan returned copies of the Annals of the Joseon Dynasty from the Mount Odae archives in Gangwon, that were looted by the Japanese colonial government. The documents were also classified as Japan’s state property, but were returned as an exception in light of the documents’ exceptional value to Koreans.

The French Embassy refused to comment on the Joongang Daily’s question as to possible changes to France’s stance following the Unesco session.

“France argues that the documents were a war trophy. But records show that Byeongin-yango was one of a series of France’s illegal invasions of the time, when the French troops looted and massacred Koreans. So the books cannot be seen as France’s war trophy, nor should that justify France’s claimed ownership rights,” contended Hwang Pyung-woo, the chief of Cultural Action and also head of the Korea Cultural Heritage Policy Research Institute.

The Cultural Heritage Administration believes that there are currently about 76,143 Korean cultural properties kept in 20 countries. The officials have confirmed more than 10,000 of them first-hand in those countries. According to their estimates, Japan has most of them, followed by the United States and Britain.

Since the 1950s, Korea has restored 7,466 artifacts through governmental and civic negotiations. They were secured through donation, purchase and permanent loan.

Today, displaced cultural heritages remain one of the stickiest issues between countries. The negotiations are never easy amid diverse interests and stances of nations and organizations involved. But there is one thing all the parties cannot refute: the importance of cultural properties to the people of a nation.

After the four-day ICPRCP forum in Seoul, the participants unanimously agreed on a six-clause statement. The first clause read, “It is an indissociable attribute of the sovereignty of every people that it should have access to, and enjoyment of, the irreplaceable symbols of its heritage.”