A meeting of two lyrical minds

A meeting of two lyrical minds 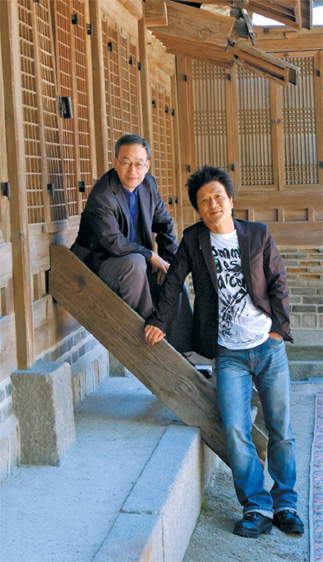 Though Ahn Chi-hwan is a singer, and Jong Ho-seung, a poet, they’re swapping roles.

Ahn selected 15 of Jong’s best-known poems, including “Life Didn’t Buy Me A Drink,” “Nostalgia,” “Dear Daffy” and “For the Whale,” and added lyrical folk rock rhythms.

In some of the songs, Jong recited his own words accompanied by a bamboo flute.

It’s not the first time that Ahn has turned poems into songs. His previous work has been based on poetry by Ryu Shi-hwa, Shin Dong-yeop and Do Jong-hwan.

It’s only the second time, however, that Ahn has devoted an entire album to one poet.

How do Ahn and Jong view their collaboration? An interview with the two took place late last month at Ahn’s studio in Yeonhui-dong, northern Seoul.

“Kim has an image of a legendary warrior while Jong is gentle and lyrical,” Ahn said.

“Though the two are completely different in character, they have a similarity - both brought passion into my heart when I was young.”

Ahn made his debut in the 1980s, a politically turbulent time. He released his first solo album in 1990 after performing as a member of Nochatsa, a group of student activist folk singers. Nochatsa is an abbreviated form of the Korean phrase “people pursuing songs.”

Ahn said that Jong’s poems helped him through the tense times, allowing him to express his emotions.

“Jong’s poems consoled my heart and allowed an emotional balance,” the singer said.

Ahn’s recent album is a note of gratitude.

Over a period of 35 years, Jong has published nine collections comprising 650 poems.

Jong recalled the first time he met Ahn. It was at a friend’s wedding ceremony in the early 1990s.

Jong saw Ahn singing one of his poems, “Which Star Are We From.”

“The song was so beautiful that the bride burst into tears,” Jong said.

The poet has been a fan of Ahn ever since.

“They are full of the most basic human emotions: love, solitude, desire and sadness. Poems have very charming lyrics to a musician.”

Jong agreed, adding that the inner rhythms that poems create are important.

It’s clear that the two have a deep mutual respect.

“It’s very difficult for a musician to create a song based on a poem,” Jong said, adding that the moment one of his poems becomes a song, it’s out of his hands. In other words, he has no power to intervene.

“It’s the musician who brings the once-silent poem alive,” he said.

Jong is satisfied with the musical interpretations of his work. He said the songs deliver emotions in just the way his poems do.

In fact, when Ahn was recording the songs, he used traditional sounds in the background, which brought out the beauty in the songs.

For example, he used an ajaeng, a seven-stringed instrument used in court music, to create a song out of a poem titled, “Landscape.”

“I always liked lyrical songs,” Ahn said, noting that they have the power to move emotions.

Jong also said that if there was no beauty in “Arirang,” a folk song that represents Korea, it wouldn’t have received as much popularity as it has today.

“The lyricism in Koreans’ hearts is the nature of all arts,” the poet said.


Ahn Chi-hwan will perform at the Millennium Hall at Sungkyunkwan University, central Seoul, on Dec. 26 and 27.

The concert is to celebrate the release of his latest album, “Singing Jong Ho-seung.”

Jong will recite a selection of poems at the concert.